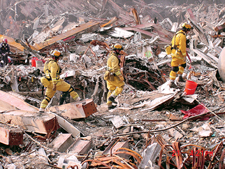 A former senior environmental agency official strongly denied allegations that the Environmental Protection Agency (epa) had given false information about the air and water quality near the World Trade Center (wtc) after 9/11. Christie Todd Whitman, epa administrator in 2001, was speaking at a hearing of the us congressional panel.

Whitman stood by her claim made shortly after the attacks that the area's "air was safe to breathe'. epa tests had shown that air and drinking water near the wtc disaster site bore "little risk to rescue workers or the public'. But nearly six years later, thousands of workers and residents were ill and some even dead.Another study by the Mount Sinai Medical Center of New York found that since the attacks, 70 per cent of the affected had new or deteriorated respiratory symptoms.