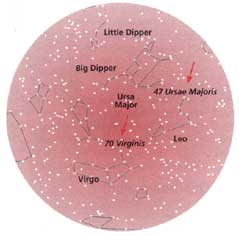 THE earth may not be the only planet capable of supporting life. Two new planets sighted recently can possibly do the same, as they show the ability to hold water and other building blocks of life. The exciting discovery was announced on January 17, 1996 at the winter meeting of the American Astronomical Society at San Antonio, Texas, by Geoffrey Marcy and researcher Paul Butler of the San Francisco State University, USA.

Marcy had earlier confirmed the existence of a planet around the star 51 Pegasi in October last year (DOWN To Earth, Vol 4, No 13), which M discovered by Michel Mayor and Did Queloz of the Geneva Observatory Switzerland.

Astronomers have been searching for planets beyond the earth's solar system for a long time now and have achieved success only recently. The main method of locating these planets are by detecting 'wobbles' in the normal spectrum of light emitted by the stars. The wobble effect is caused due to the gravitational pull of the star the body revolving around it. The an and orbital distances have also been estimated from the shifts in the spectral from the stars. Jupiter produces a 12.5 metre-per-second wobble in the sun's orbit.

Lying within a distance of 35 light years, these two planets are relatively close to earth. The stars around which they revolve are visible to the naked eye and are the 70 Virginis of the Virgo constellation and 47 Ursae Majoris of the Big Dipper or Great Bear constellation. The star, 70 Virginis, is very similar to the sun, but a few hundred degrees cooler and three billion years older.

One of the new worlds, which has a mass nine times that of Jupiter, sweeps around 70 Virginis in an elongated path, taking 116 days to complete one revolution.

Marcy and Butler, who conducted the studies at the University of California, Berkeley, used the standard formulae for sunlight absorption and heat radiation to measure the temperature of this planet. It was found to be about 85'c, which according to Marcy, "is cool enough to permit molecules to exist, ranging from carbon dioxide to complicated organic molecules", such as those which make up living cells. The boiling point of water is 100