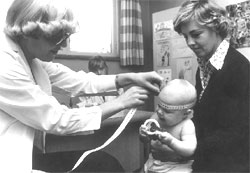 after months of speculation, the us Food and Drug Administration (fda) has finally decided to retain its rule which makes it mandatory for all drug makers to conduct paediatric trials.

The agency came under fire from public health groups and lawmakers recently when it announced plans to suspend the paediatric drug testing rule for two years. According to the guideline, pharmaceutical companies are required to conduct clinical paediatric trials. But as it is costly and potentially dangerous to test drugs on children, pharmaceutical companies primarily test them on adults.

Lawmakers and paediatricians had severely criticised fda's recent decision to reverse the drug testing rule. They felt that it could deprive physicians and parents of information on how best to treat children. According to Tommy Thompson, secretary of the us department of health and human services (hhs), the rule is an important tool in ensuring that children receive safe and effective medical care.

The fda had cited two factors in its earlier decision. The first, it pointed out, was that in 2000 three groups had filed a lawsuit against the agency alleging that it did not have the authority to issue such a guideline. The other reason was that the fda wanted to study whether the paediatric testing rule adopted in 1997 was redundant in view of another programme known as the paediatric exclusivity rule. This gives drug makers, who conduct paediatric tests, an additional six months of patent protection. The extensions can, in some cases, generate hundreds of millions of dollars in additional revenue.

However, a careful assessment of the situation made the fda officials reconsider their decision. "A quick review showed us that the situation was more complicated and we needed further public inputs to ascertain the efficacy of the rules,' Murray Lumpkin, fda's senior associate commissioner, is known to have said.

According to Lumpkin, fda is now taking the help of the public to improve the rule. Public health groups, too, have praised this move of the administration. "I give them a lot of credit for being willing to reverse field when the details were pointed out to them,' said Richard Gorman, chairperson of the American Academy of Paediatrics Drug Committee.