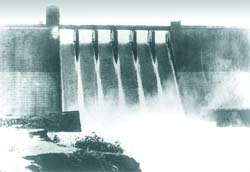 close on the heels of the Supreme Court verdict on Sardar Sarovar Project ( ssp ), a recent report by the World Commission on Dams ( wcd ) has clearly stated that dams have exacted a high price in terms of human and environmental damage. The commission is an independent body whose sponsors include the World Bank.

"The fundamental negative finding is the failure to fully account for the social impact dams have had on communities, both displaced and those downstream,' said Achim Steiner, wcd 's secretary-general. wcd estimates 40-80 million people have been displaced so far. In addition to the human tragedy, the commission found that many dams are run inefficiently, involve cost overruns and have led to loss of flood plains.

Dam critics have already started challenging pro-dam organisations, activists and donor agencies, including the World Bank. "Had the planning process proposed by the wcd been followed in the past, many dams would not have been built,' says Patrick McCully of the California-based International Rivers Network.

The challenge could influence the future of China's Three Gorges dam and India's ssp among others. "Each dam is unique. We are trying to provide decisionmakers and the public with a criteria with which to assess their choice,' Steiner explained. But he stressed that they only offered recommendations and it was up to those concerned to comply.