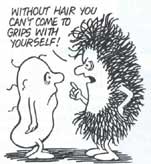 IT SEEMS the war between antibiotics and bacteria is a never-ending one. Time and again these clever organisms have made the most potent drugs look like placebos. But researchers at the Washington University's School of Medicine in St Louis believe they may have finally nailed the Achilles' heel of bacteria -- tiny hair-like projections, called pili, that the microbes use to cling to cells in kidney, lung, and other organs. So, remove these hairs, and the body could simply flush out the invaders.

Researchers have already identified the proteins that control the growth of pili. The next step is to design a depilating drug.