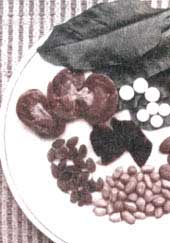 A MINIMAL amount of iron is critical for our health and perhaps life itself. But what researchers are now concerned with relates to the indiscriminate loading of iron supplements as well as the widespread use of vitamin C, which enhances the absorption of dietary iron from the gut. Our bodies have imperfect mechanisms to regulate the amount of iron we absorb and store in tissues.

Therefore, iron overload can result when the diet is filled with iron-rich foods like red meat and liver or by taking iron supplements when the body is not iron-deficient. One important research area now is the detection of iron overload and the means to prevent organ damage by the removal of excess iron. There is enough laboratory and clinical evidence to suggest that excess iron in tissues can promote coronary artery disease and foster the growth of latent cancers and infectious agents. In addition, smoking adds this element to the body as the tobacco leaves are rich in iron. Workers who are continuously exposed to smoke in industries also run a similar risk (The Lancet, Vol 349, No 9045).

Our body has few natural means of getting rid of excess iron. Occasional bleeding certainly helps, which is why few menstruating women show up with iron overload problems. In fact, doctors believe that such a cycle of monthly bleeding also contributes to their protection against heart disease and colon cancer. Aspirin and related drugs and vigorous exercises may help as they cause the repeated loss of small quantities of blood from the digestive tract. There is a growing body of evidence about other health problems associated with excess iron. Iron is a catalyst for the formation of free radicals in the body, which are highly active chemicals implicated in cancer, heart disease and the ageing of cells. Experts believe that obsession with diets rich in iron is indirectly contributing to the ill-health and longevity of many adults in developing societies which is still not widely investigated. According to Remain Moirand and others from the INSERM, Rennes, France in view of the known adverse effects, it is essential that treatment of excess of iron, no matter what ever be the severity, could be an important goal for general health.

Eugene Weinberg from Indiana University at Bloomington, who has been looking at this problem for over two decades, has also been consistently warning of the adverse effects of iron overload. He says that both cancer cells as well as infectious organisms need iron and oxygen from the host to grow. Cancer cells can live in a semi-dormant state for a long time but once they get triggered to multiply, they need both the ingredients for their growth. He says that people who smoke, work in industries where they are exposed to iron or iron-oxide powder could acquire high levels of iron in their lung tissues, thus increasing their risk for lung cancer. Mercifully, there are simple measures to avoid iron overload.

The first and the most important precaution is to avoid iron supplements unless there is a clear-cut iron deficiency. Lesser consumption of foods that are very rich in iron like liver and kidney can also help as our bodies can absorb iron from animal foods more efficiently. The US Food and Drug Administration recommends that the daily requirements of iron for healthy adult males is about 10 milligram (mg) per day and for adult females (up to 50 years), about 15 mg per day. Pregnant women require higher quantities (30 mg) as also lactating women (15 mg), while postmenopausal women need just 10 mg a day. Stopping smoking helps, as does moderate exercise. Eating foods with more whole grains that contain phytic acid which combines with iron and keeps iron out of circulation, also helps. Alcohol increases the solubility of iron and makes it easier to store in the body. Finally, donating blood a few times a year helps. Besides giving life to someone who is needy, it keeps one healthy too.