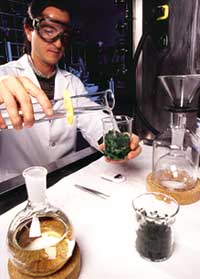 artemisinin is the only drug available right now against Plasmodium falciparum, one of the malaria-causing pathogens. But its indiscriminate use may make the drug ineffectual, warns a study published in The Lancet (Vol 366, No 9501, December 3, 2005).

Though the World Health Organization (who) recommends that artemisinin should be used in combination with other antimalarial drugs, it is being used as a monotherapy in many parts of the world. This could make P falciparum, which affects the brain, acquire drug resistance. A combination therapy ensures that all pathogens in the body are killed during treatment.

The study was conducted by researchers from units of Paris-based Institut Pasteur in different countries. They investigated the in vitro susceptibility of 530 P falciparum samples taken from malaria patients in Cambodia, French Guiana and Senegal.

The scientists found that all drug-resistant cases came from areas with uncontrolled use of artemisinin. The pathogen from Cambodia, where artemisinin combination therapy is used, was sensitive but the samples from Senegal and French Guiana showed drug resistance. In French Guiana, two resistant samples originated from Cacao, a small town where artemisinin derivatives illegally imported from Southeast Asia were being used. The other resistant samples came from the gold mining region along the Maroni river, where self-medication is common. In Senegal, monotherapy is common in the private sector. The researchers also found that the loss of sensitivity was linked to mutations in the gene, serca -type pfatp ase6, which is thought to be targeted by artemisinin.

The researchers feel the pathogen's reduced susceptibility to drugs could be the first indication of a probable resistance. "This rise in resistance indicates the need for increased vigilance and a coordinated and rapid deployment of drug combinations,' write the researchers led by Ronan Jambou from Institut Pasteur, Senegal.

The study is significant for India, which recently decided to change its policy and adopt a combination therapy, at least in areas where falciparum malaria has been seen. Studies by the National Institute of Malaria Research have shown high treatment failure for chloroquine in 44 districts of 18 states, where a revised drug policy would be followed as per the National Vector Borne Disease Control Programme. The drugs used will be sulfadoxine pyremethamine (sp) and artemisinin.