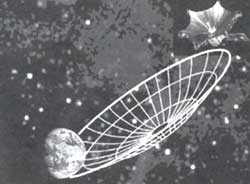 BLACK HOLES are the darkest objects in the Cosmos and in our understanding. Scientists conjecture that these compact objects are formed when a dying star explodes and the matter collapses in a very small region of space. The matter density is so high that the gravity of the object is strong enough to prevent light from escaping out.

Our understanding of black holes comes from theories of gravitation and cosmology. Astronomers have extensively studied these by looking at their effect on other objects. One of the most important instruments in studying black holes is the radio telescope.

A new international initiative has reported the first results from an orbiting radio telescope. These may go on to revolutionise our understanding of many of the Universe's 'crazy' objects, including black holes (Science, Vol 281, No 5384).

Radio observation of the Cosmos began when Karl Jansky detected radio waves from space in 1933. Several powerful telescopes were built over the years. But the big break came in the 1950s with the development of radio interferometers, which use wave interference to make precise measurements of length or displacement. These consist of two or more widely separated antennae connected by transmission lines. With their greatly increased resolution, they can be used to determine the position or diameter of a radio source or to separate two closely spaced sources.

Another significant step in this direction is the phase-array telescope, which consists of a large numbers of relatively small antennae elements arranged over a relatively large area, yielding the effective sensitivity and resolution of an antenna much larger than can practicably be built.

An example of such a system is the 27-antenna Very Large Array near Socorro, New Mexico, USA, one of the world's largest and most sensitive radio telescopes. Use of atomic clocks and magnetic tapes has allowed scientists to do away with transmission lines and to use individual telescopes which are very far away as parts of a radio interferometer.

Once the hurdle of transmission lines was overcome, it was suggested that a large telescope be used in space. For this purpose, a radio telescope with a diameter of 8 meters was put into orbit by Japanese scientists in 1997.

This telescope, called the Highly Advanced Laboratory for Communications and Astronomy (HALCA), is used complements ground-based telescopes to give a telescope with an effective diameter of over 25,000 km. Its resolution is phenomenal - comparable to reading this page from a distance of 2,000 km.

The first results from the space observatory have been reported recently. These indicate the presence of massive black holes in the centre of Virgo A, a very strong radio source which has two giant radio lobes emanating from it.

The success of this mission has led to astronomers planning even more ambitious missions like the us National Aeronautical and Space Administartion's 25-metre orbiting telescope. With these new eyes on the Universe, we would be closer to explaining some of the outstanding conundrums of the Cosmos.