The fly that got away 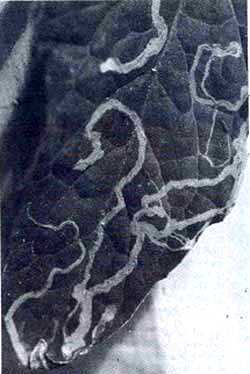 INDIAN agricultural scientists have virtually given up trying to contain the spread of an American pest that sneaked into India about two years ago. G C Tewari of the Indian Council of Agricultural Research (ICAR), who first studied the pest, now says, "We will have to live with the pest. It is too late to eradicate it."

Larvae of the American serpentine leaf miner (Liriomyza trifolii), a type of fly, feed on leaves until the plant dies. They attack about 250 types of plants, including vegetables, pulses, oilseeds and ornamentals. The infestation is especially severe in Karnataka, Maharashtra, Andhra Pradesh, Tamil Nadu, Madhya Pradesh, Uttar Pradesh, Gujarat and Delhi. The pest has caused most damage to tomato, cotton and sunflower crops.

The pest's presence was discovered two years ago when serpentine white lines ending in the shape of a snake's hood appeared on vegetables and other plants. Tewari alerted ICAR to the possibility of a new plant pest in the country. The International Institute of Entomology in London confirmed the pest was the American leaf miner. Tewari figures the pest also transmits plant diseases as it moves from one plant to another.

ICAR scientists suspect the pest entered the country on chrysanthemum stems imported in 1990-91. Points out Tewari, "The seed policy adopted in 1988, which liberalised plant import, made it easier for such lapses to occur."

By the time ICAR alerted agricultural universities and state agriculture departments in December 1992, the insect had already occupied large areas. Chemical suppression and localisation of the pest was ruled out and the only alternative was to control the pest.

The pest multiplies fast -- there are 15 generations in one year -- and so quickly develops immunity to pesticides. While in America the well-organised system of farming and the comparatively severe winter keep a check on the pest population, the pest thrives in tropical climate. Moreover, natural enemies of the pest are absent in India.

According to reports received by ICAR, the pest is estimated to have destroyed 25 per cent of the tomato crop in Maharashtra, Andhra Pradesh and Karnataka in the past two years. Farmers near Rajahmundry in Andhra Pradesh now harvest only 4 pickings of gourd as against 6-7 pickings normally.

But V Raghunathan, the government's plant protection adviser and head of the Union ministry of agriculture's Directorate of Plant Protection, Quarantine and Storage, asserts the presence of the pest is negligible. According to directorate officials, "No immediate crop loss has been reported in any of our 26 field stations."

Raghunathan also insists the fly must have entered the country on smuggled plants because "no insect can survive our strict quarantine process". ICAR has funded research projects on the biology and management of the pest at University of Agricultural Sciences in Dharwad and the Indian Institute of Horticultural Research, Bangalore. Researchers are studying parasites that could be imported for use against the pest and other native parasites. Spraying of neem seed kernel extract has proved to be an effective biological control method.

Although local farmers are now fighting the pest with conventional methods, its rapid proliferation indicates that the problem could spiral out of control. Meanwhile, plant protection directorate officials say, "It will take another 2-3 years to work out a long-term integrated pest control strategy."