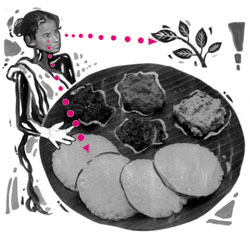 according to a study by the Harvard School of Public Health, Boston, in the us, those who have a starchy diet which was low in fibre and took a lot of soft drinks, ran two and a half times the risk of diabetes than women who took less of these foods and more of roughage, especially fibre from whole-grain cereals (Journal of American Medical Association, Vol 277, No 6).

The study tracked 65,173 women aged 40-65 years for six years as part of a 20-year longitudinal study of diet and lifestyle factors in relation to chronic disease among over 1.20 lakh us female nurses. The starchy food increased the risk of diabetes in all these women, independent of other risk factors like age, obesity, exercise and family history. Significantly, the overall fat intake was not associated with the risk of diabetes.According to Walter Willett, a professor of epidemiology and nutrition and the leader of the team, they have observed similar effect in men as well.

A number of factors are responsible for the onset of diabetes, specially heredity, obesity and stress. Accordingly, diabetes has been classified into two types. The insulin-dependent or juvenile diabetes and the non-insulin dependent or maturity-onset diabetes. The first category, also called type i diabetes, usually affects children or adolescents. They inherit from their parents the diabetic gene with the disease itself precipitated by factors like damage of the pancreas and viral infections in the body. There is little or no production of insulin and as a result such patients need daily insulin injections.

The maturity onset or type ii diabetes is most common and is on the rise both in the developed and developing societies, where obesity is fast emerging as a serious problem. However, diabetes is now being observed in undernourished subjects as well. An estimated two to four per cent of the Indian population is affected by diabetes, with more than 90 per cent of them belonging to type ii. In fact, several millions may be having this disease without knowing it. Diabetes is characterised by a shortage of the insulin hormone or an inability of the body to use the hormone properly to metabolise glucose and control its level in the blood.

In the dietary management that patients are expected to follow, medical advice is coupled with proper dietary planning, like dividing the daily calorie intake into three or five meals a day. They are allowed limited use of sugar, honey or jaggery as long as the total calorie limit is not exceeded. Interestingly, the notion that sugar causes diabetes has recently been shot down. But the emphasis has always been that calories from fat be kept at the bare minimum to the extent that they are asked to use skimmed milk and to remove the cream from milk before making yogurt.

Highly recommended foods include whole grain cereals and their products, green leafy vegetables, legumes, pulses, carrots, potatoes and some fruits. According to Willets, Americans are told to load up on these foods as they are considered low in fat. Millions of health conscious people were doing just that with the base of food pyramid being 11 servings a day of carbohydrates, which invariably included potatoes.

Although researchers have long known that eating too much is an important risk factor for diabetes as the disease can be brought about by obesity, there has never been evidence linking it to specific foods, not even sweets. The comment by the president of the Health Care and Education at the American Diabetic Association, Christian Beebe tells it all: "At the American Diabetes Association, we're delighted that these authors attempted to get to the issue of the quality of diet in diabetes. We have not had a lot of information on exactly what in the diet could predispose you to diabetes. This study only begins to suggest what we need to look at further."