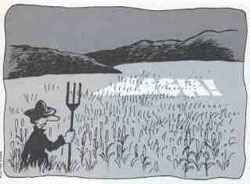 IMAGINE a vast expanse of agricultural field interspersed with luminous patches. In the not too distant future, this vision will no longer be left to the imagination, but could become a reality.

Scientists at UK's Oxford University and the University of Wales have succeeded in developing a unique early warning system for tackling agricultural disasters. They have transferred genes from luminescent jellyfish to tobacco plants. These genes carry proteins - called apoacquarin - which emit light under stress (for instance, in an attack by a pest or in an outbreak of a disease) enabling the plants to glow. In three years' time, the researchers hope to about the level of luminescence in a plant as is present in a glow-worm.

Fungal infections cause plants to undergo internal stress several weeks before the physical appearance of a disease. If they are carrying the appropriate jellyfish genes, the plants light up at the slightest hint of stress.

This early warning system could help the farmer take adequate steps and measures to forestall damage to his fields. The genetically tre would be present in a ratio of I to 1,000 in seed bags supplied to farmers. The luminous patches would be visible at night, or could be detected with the help of remote sensing equipment.

At present the light is bluish, but it could be adapted in future ff the plants are carry4rig the appropriate jeflyfish genes. theY light UP and glow at the slightest hint of stress same get to green or red. According to the scientists, plants could be engineered to respond to specific stress conditions. For instance, they could start glowing when they need to be watered. Other plants could be engineered to respond to a slight touch or a person's breath on them.

In another research, Bill Cockburn and colleagues at Leicester University have successfully transferred genes for antibodies against human diseases to experimental tobacco and potato plants. Cockburn reasons that antibody-containing plants could replace oral treatments. Bacterial tooth decay has been targeted for this form of treatment.