Half truths and damned lies 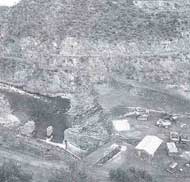 IN 1980, the then Prime Minister Indira Gandhi asked the Department of Science and Technology to have "another in-depth look" at the Tehri project, referring to the "great deal of distress and a feeling that contractors and other groups will be the main gainers."

Till today, the Tehri Project has not been given environmental clearance by the government. At least twice in the past, the Ministry of Environment and Forests (mef) had recommended jettisoning the project, following negative reports by its own committees.

As early as 1973, the local unit of the Communist Party of India began organising anti-dam agitations. In 1978, when contracts for building tunnels to divert the Bhilangana and the Bhagirathi rivers were awarded, the Tehri Bandh Virodhi Sangarsh Samiti (Anti-Tehri Dam Struggle Committee) was formed.

By December 1979, protests forced the Union Government to set up a working group, chaired by Sunil K Roy, for an environmental impact assessment of the Tehri dam. The group commissioned a series of studies, even as work on the dam continued. In the final report submitted in August 1986, Roy had written, "I confess that my experience in this case as Chairman has been harrowing and distressing. I have chaired innumerable committees and groups in India and in other parts of the world. I have never encountered such an unbendingly dogmatic approach to all issues which were not positively framed to ensure continued work on the Tehri Dam, whatever the cost to the environment and public funds."

On the basis of the Roy Committee Report the mef unequivocally concluded that the project should be abandoned. But at the same time, a committee of Secretaries referred the Roy Committee's report to the Central Water Commission (cwc), which found the dam safe -- despite the absence of any new studies or evidence.

In 1986 the visiting Soviet supremo Mikhail Gorbachev brought assurances of technical and financial assistance for the dam, its powerhouses and transmission systems. The Soviets agreed to build the Koteswar dam, a downstream storage reservoir, from where water is to be pumped back to the Tehri reservoir during non-peak periods to meet peak electricity demand.

The Soviet presence necessitated swift environmental clearance. On March 10, 1987, the Union Minister for Environment and Forests, Maneka Gandhi, did a remarkable volte face, informing the Rajya Sabha that since the Roy Committee had made no categorical recommendations, the government would proceed with the project.

In October 1987, Alexander Fink, the Soviet chief engineer of the project and his team of some leading international experts in the field of high dam construction in mountains, found that the Tehri dam was not properly designed. According to Fink, the potential seismic damage to the dam was substantially greater than anticipated by its designers. The Soviet engineers recommended a widening of the dam foundations from 1,128 km to 1.5 km and the use of crumble proof stones for construction.

Evidence against the project's safety mounted. After local people stopped work at the dam site in 1989, the Environmental Appraisal Committee for River Valley Projects of the MEF reviewed the project. In 1990, this committee unanimously held that give the "geological and social impacts accompanying the Project", it should not be taken up "as it does not merit environmental clearance."

The report berated the cwc's contention that the dam's surviving capacity of an earthquake measuring 7.0 on the Reichter scale was enough, as the area could possibly not have quakes of a higher magnitude. But the issue remained contentious.

To wriggle out of the scathing attack by the environmental appraisal committee, the government set up a High level Committee (hlc) in 1990 to review the seismicity issue. The hlc decided that the dam's existing base was safe; that earthquakes of 7-plus magnitude would produce a lower peak ground acceleration than a quake of magnitude 7.0. Leading international experts dismiss this argument, but, as Nalni Jayal argues, the government can do little about widening the base because the diversion tunnels have already been constructed and it is not possible to increase the dam's base at this stage.