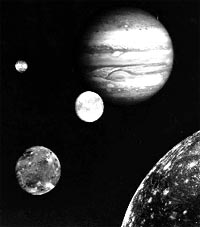 EXTRATERRESTRIAL life has been speculated about by many scientists for long. Some efforts like the search for extraterrestrial intelligence have been going on for some time now, though most of the research has been at the theoretical level. With the discovery of giant planets and other solar systems (planets orbiting main sequence stars like our Sun) in the last two years, the question about the possibility of extraterrestrial life is once again at the centre stage.

The issue of existence of life outside our solar system hinges on the notion of habitable zones. This is a contentious issue, because the needs of humans differ vastly from those of algae and other forms of life. Nevertheless, extrapolating from the evolution of life on earth, there seems to be a broad consensus on the need for surface water.

Recently, D M Williams and his collaborators at the Pennsylvania State University have argued that the place to look for life is not in these planets but the rocky moons orbiting these objects. They believe that for a moon to be habitable, it will need to be a little bigger than Mars (about 10 per cent bigger than our earth). Atmosphere that can retain liquid water on the surface for billions of years is another necessity. Besides, the moon will also need a strong magnetic field. This is required to protect the moon from the constant bombardment of charged particles from the magnetospbere of the mother planet. This requirement is not too stringent as at least one of the moons in our own solar system - Ganymede, the largest moon of Jupiter - does have a magnetic field. Unfortunately, it is not massive enough to support liquid water. Williams and his group argue that the planetary companions of the stars 16 Cygni B and 47 Ursae Majoris might have habitable moons which satisfy these criteria.

There is of course the question of the definition of a habitable zone as used by Williams and his collaborators. Many researchers, including the late Carl Sagan, have argued that there is no need to use such a conservative definition of habitability, as there are many terrestrial ecologies that exist in conditions far more inhospitable than those Postulated for extraterrestrial life. In any case, the whole issue can only be settled once we have the means to detect earth-sized objects at great distances. This, unfortunately, is not going to be possible for many years to come.