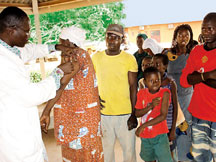 The government of Uganda has confirmed the outbreak of the deadly meningitis bacterium in the country. On January 16, health officials said that 121 people are suffering from the disease in Arua and Nebbi districts alone; three have already succumbed to it.

Meanwhile, who has confirmed similar outbreaks in three other West African countries