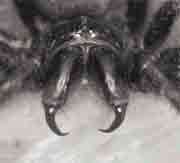 the funnel web spider is feared throughout Australia. One of the world's deadliest spiders, its venom can kill humans. But Glenn King, a biochemist, and Merlin Howden, a pharmacologist from the University of Sidney have concluded that the spider could be the means of a pesticide that does not harm the environment ( New Scientist , Vol 154, No 2082).

The scientists found that the active compound in the venom attacks only the nervous systems of insects that are its prey, and humans. Crops are left unharmed and large animals are naturally immune to the venom. Small protein fragments called peptides are responsible for delivering the venom's lethal neuro-toxic effect. The researchers have mapped all the 45 active compounds in the venom. Laboratory tests revealed that one of the peptides was specific to insect brain cells. "It is remarkable that parts of the venom affect humans and other parts are specific to insects,' says King.

The insect-specific compound holds open tiny pores in the membranes of insects' nerve cells. These pores usually act as passages for ions that carry message pulses along the nerve. The jamming causes amino acids, sugars, sodium, potassium and other such substances essential to proper functioning of the brain to pour into the cell. This disrupts neurological activity with fatal consequences. "But it does not kill any non-insect creatures it has been tried on so far. This could serve as a