An ocean of life 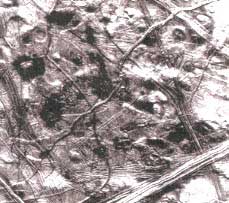 LOOKING, at the images clicked by spacecraft Galileo's closest flyby of Europa on February 20, 1997, scientists say they are confident that the Jovian moon has a thin ice crust covering either liquid water or slush. The tantalising new images put forward the possibility that the slushy concoction of chemicals in this region could nurture life.

"How often is an ocean discovered? The last one was the Pacific by Balboa and that was 500 years ago," said Richard Terrile, a scientist at the Jet Propulsion Laboratory (JPL) in Pasadena, California.

A small pocket of water may have been found on the moon. And Mars once upon a time had rivers. But if most of Europa's ice crust is melted, the immense volume of water there could be more than that in all the Earth's oceans combined.

Scientists believe that such an ocean is likely to contain a slushy cocktail of chemicals and that there is a heat source causing the icebergs and other disruptions on Europa's surface. The slushy cocktail and a heat source are two key elements that are essential for life to exist. Europa has no atmosphere, so for life to exist there it would have to be in the sub-surface ocean. Recent discoveries of microbial life deep within the Earth's oceans and in other unexpectedly extreme environments on our planet have bolstered the theory that if an ocean exists on icy Europa, it would be one of the two most promising places in the solar system to search for alien organisms - Mars being the other.

The issue of when the water flowed and whether it is frozen solid now is much more controversial. Planetary scientist Clark Chapman of the Southwest Research Institute, US, was among those asserting that Europa's surface is very young, about a few million years or less, and constantly changing today. But Michael Carr of the US geological survey and his colleagues argue that the surface is probably closer to a billion years old.