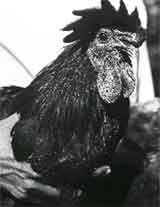 in front of a poultry firm in district Jhabua, Madhya Pradesh ( mp ), a board catches the eye. With a furious looking photograph of a black chicken, it declares: "Kadaknath, pride of Madhya Pradesh.' It is, literally. Even the flesh, bone and skin of the species known as Kadaknath is black. Local people call it kala mans (black meat). This variety is unique to Jhabua. Its meat is delicious, easily digestible, has high protein value with very low fat-content. The Central Food and Research Institute, Mysore, has studied its medicinal qualities and found it suitable for cardiac patients. The tribals believe it that it has aphrodisiac qualities, hence the name Kadaknath (meaning something strong).

But this "pride' will soon disappear due to over-consumption by humans and very low reproduction rate. Jhabua has an estimated 30,000 birds of this species. According to S V Bhale, assistant director of Jhabua's veterinary services, the figure fell to 8,000 in 1979-80, and the species was on the verge of extinction. Kadaknath is considered the most precious offering to gods by the tribals in the area. It is also used in other religious ceremonies.

In 1983, the mp government set up the Kadaknath Breeding Farm in Jhabua to boost the dwindling numbers. The farm has a hatching capacity of 13,000 chicks per week, but due to nonavailability of sufficient eggs, the current production is 600 per week. Kadaknath is found in three colours, jet black, pencil and golden. Kadaknath has poor reproduction rate, with only 70 to 100 eggs per year. But its growth is very rapid. A Kadaknath cock weighs about 2.5-3 kg in six to eight months, while the hen weighs about two kg in the same period.

Kadaknath is a very delicate bird, and lacks resistance to climatic changes. Degradation of forest and chronic drought situation in the region have also affected Kadaknath. As its heat resistance is very low, the long spell of summer in the region is kills a large number of animals each year. During breeding time, it can survive temperatures up to 37.7