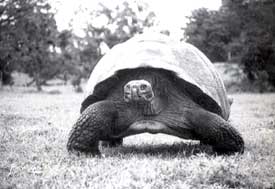 ERUPTIONS of the Galdpagos volcano Cerro Azul have forced conservationists to speed the capture of 20 endangered giant tortoises for a captive breeding programme.

Recently a helicopter was hired for two days to airlift some 11 tortoises from the island of Isabela, the largest in the Galdpagos archipelago. The remaining animals, some weighing as much as 220 kg each, will be airlifted, carried across rugged terrain, loaded on to small boats and transported round the coast, says Howard Snell, who heads the tortoise protection programme run by the Charles Darwin Research Station.

The giant tortoises of the Galdpagos were decimated by hunters more than a century ago. The population has not recovered since because pigs and dogs introduced to the islands have continuously prayed on the eggs and young. In an attempt to ensure that tortoises have a future, the Galdpagos National Park Service and the Darwin station are operating a captive breeding programme in Villamil, some 40 km east of the erupting volcano.

Cerro Azul began to erupt on September 15. Initially the lava posed little threat to the two varieties of tortoise that live on its slopes.

But a few days later, on September 25, the flow split and one branch started heading directly towards the only nesting area for the rarer tortoise, Geochelone elephantopus guntheri (G elephantopus guntheri), of which only 100 individuals remain. Although the flow has slowed on September 29, it was merely 1.5 km away form the nests. Snell says that fieldworkers fear that several tortoises may already have been killed by the lava flow.

Given the danger, Snell and his team decided to capture 20 Giant elephantopus guntheris immediately. But the breeding centre is already full. Snell says incubators and other equipment are desperately needed, including new artificial nests for juveniles to maintain separate populations of the different subspecies being bred.

Despite the immediate threat, Snell stresses that the introduced animals are still the tortoises' main enemies."Unfortunately those problems don't have a quick fix," he says. "These tortoises were endangered before this eruption began and they'll remain endangered even long after it's over,"Snell concludes.