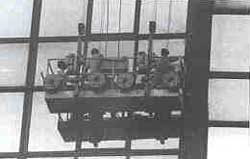 THE ardous of the window cleaners are numbered. A self-cleaning window glass is on the horizon, as described by Adam Heller of the University of Texas, Austin, at a meeting of the American Chemical Society of Chicago, held between August 20-24, 1995. A photocatalytic coating of titanium dioxide (Ti02), just 10 nanometres thick on ordinary soda-lime glass Going 'self. will photooxidise 200 nanometres per day of organic contaminants in normal day-light.

Reporting the proceedings of the Society, Nature (Vol 377, No 6547), stated that the photocatalytic properties of T'02 have been recognised for decades, and have been explored for diverse applications ranging from oilspill remediation to artificial photosynthesis. Moreover, photographic lenses are routinely coated with T'02 to convey improved toughness dnd anti-reflectivity. But a layer of the oxide deposited onto ordinary window glass is not photochernically active, because the freeradical-induced oxidation reaction is suppressed by the diffusion of sodium from the glass into the T'02 film.

Heller has shown that pre-treating soda-lime glass with boiling concentrated sulphuric acid for 30 minutes will leach out the sodium ions in the glass. A T'02 thin film can then be applied by spin-coating titanium alkoxide onto the glass, hydrolysing (adding water) and clacining (treating with calcium) at 500'c. To extend this treatment to the industrial scale, Heller believes that it would be necessary to introduce the sodium-leaching stage into the glass processing, before the molten glass is window-cleaning revolutionised formed into sheets. A car windscreen made in this way is perhaps likely to cost an additional us $50-100 to the customer.

A self-cleaning windscreen would encounter another problem, however. Because of the relatively high refractive index of the T'02 coating, the coated glass would be highly reflective, so that a tilted windscreen could contain a prominent reflection the dashboard. it mi then be necessary reduce the reflectivity oi the dashboard itself, f 4 example, by applying a polarising polymer film (light reflected from the dashboard is generally polarized, and so can be suppressed by a cross polarized film).

The T'02 films Pripared this way are clear and polycrystalline. But the idea might be extended to the opaque emulsions used in white paint, leading It self-cleaning coatings that can be painted onto any surface. The Totc company in Japan is developing such paints, and has just begun to market photocatalytic ceramic tiles for use in hospitals and bathrooms, whose photocatalytic action will be driven by the ultraviolet component of fluorescent strip lighting.