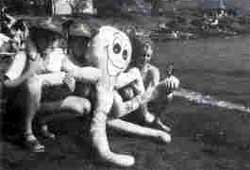 WHEN Bente Roestad began writing books about a mate octopus named Blekkulf in 1989, she couldn't have imagined that one day, Blekkulf would have 15,000 children across Norway joining him in his crusade to halt environmental degradation.

It all began when as a little girl, Roestad had once watched fisherfolk bringing in an octopus from the sea. Roestad, then all of 9, made up in her mind a friend called Blekkulf (from blekk, which in Norwegian means black, and Ulf, a boy's name). She revelled in daydreaming and romanticising about a myriad adventures she and Blekkulf had at sea. But the fantastic dreams never went away. Years later, Roestad wrote 16 immensely popular books for children about how Blekkulf and his friends fought against pollution and other problems affecting the environment.

In 1990, the national television channel broadcast a programme about Blekkulf the octopus and his friends, Crab Cris, Ric'k Shark and others. Children were told that they could later contact the station if they wanted to speak to someone about friendship and the environment. Everyone was promised an answer. At the end of the show, the station was deluged with 42,000 calls from eager children commenting on and asking about the environment. And then came the sackfuls of letters, drawings, paintings and poems on environment from children across Norway.

The barrage of letters and calls took the station officials by surprise. Unable to answer.everyone as they had promised, hassled officials at the station then sent an sos to the Norwegian Society-for the Conservation of Nature (NSCN). The NSCN decided to pool the enthusiasm generated by starting a club for all interested children, The r6ult was the organisation, Blekkulfs Miljodetektiver (6, meaning Blekkulf, the environmental detective), with a si@iiling, purple-coloured Blekkulf brandishing a magnifying @lass as its mascot. Today, 0.4 percent ofNorway's population 6f4 million is a part ofthe Bm network across the country.

The Bm strategy is to pose enviro'PImental problems to children, which they can help soly' e. Explains Ann-Kristin Grodhal, coordinator Of BM in Osl@, "Environmental problems are sometimes so overwhelming that children turn apathetic. It is important for us to .'sh Vw them that if everybody does something together, we will get further." The idea is to get children to love nature so that they take care of it. Adds Grodhal, "We don't want BM to be like school, but something fun and interesting. We believe in learning by doing."

Local groups of eco-detectives, as. the members Of Bm are called, aged between 5 and 14, meet once a week or once a month after school hours, along with j3m volunteers. And then they make bird nests, go birdwatching or fishing, make paper, go for nature walks, recycle paper, write poems and songs, organise clean-up campaigns - no one sets a limit as far as activities go. And most important, the children don't just talk about doing things, they actually do them.

In Oslo, 3 eco-detectives, Jens, Mads and Nicolai, get together after school every Thursday to clean up their neighbourhood. In Dalbo, 9-year-old Tina Mazzawi recounts her encounter with the local storekeeper. She had asked for recycled paper at the store, only to be -told that they-had none. "So 1-made_my_voice No kiddin. eco-sleuts are serious young citizens angry and said 'Then you should get some. Don't you know recycled paper is the best kind?"' The next week, nearly all the paper sold at the store was recycled material.

In Hammerbarken School in Baerum, children collect used milk cartons and on the I st of every month, deliver these to a local factory that makes egg cartons. Says one child wisely, "If everyone picked up a piece of trash today, the earth would be clean by this evening."

Bm has recently started a "Save the Rainforest Action." Members from all over the country collect money in innovative ways and send it to the Rainforest Foundation. In Oslo, for example, the eco-detectives collect empty bottles from the neighbourhood and bring them to the store to get money from them.

Says Gro Harlem Brundtland, Prime Minister of Norway, "By being eco-detectives, children show in practice that everybody can do something, and that every step in the right diretion is of importance."

And as this young environmental brigade works enthusiastically to protect nature, they cannot conceal their impatience with wayward adults. Says Kjetil Lysine, a BM member from Oslo, "I think its stupid that people can't understand how much we are hurting the earth if we go on polluting it like we are doing now. When will people learn?" The pressure is now on other members of society to mend their ways. And children have proved exceptionally effective in changing the behaviour of adults. As Grodhal says, "Parents want to be good idols for their children, so when the children say 'you must do this or that, otherwise you harm nature,' they usually listen."

The Oslo office of the Bm helps out interested but floun-dering parents and teachers who want to do something but don't know what, by arranging seminars for them. The BM magazine, Floskepasten, edited by Roestad and published 8 times a year, also gives them ideas on activities they can try out with their bubbling bunch of eco-detectives.

Such has been Blekkulfs success that he has now travelled abroad, spreading his green message. Coinciding with the Rio conference in 1992, a Viking ship replica called "Gaia" travelled across the Atlantic and reached out to American children as Inky Arms. Inky is already popular amongst Turkish children under the name Alipot. Inky books tailored to suit the environment of their countries have also been introduced in Denmark, Sweden, Australia, Poland and Russia.