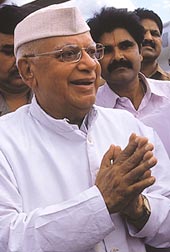 What do you think is the cause of this accident?
The Union power minister has announced the setting up of a technical committee under the chairmanship of M S Reddy. We have ordered a non-technical enquiry to be done by a magistrate. I will let you know exactly what has been the problem.once the reports come.

Will the questions on the safety of the dam be raised again?
In the future we have decided that no such big dams should come up in Uttaranchal. Already many dams being constructed today are tunnel-based ( which do not require impoundment of water and thus a creation of reservoir) and not dam-based (where a reservoir is created). So the lessons that we have learnt from Tehri is that instead of constructing huge dams, where you also have a problem of displaced people and lot of technical problems, we will construct the tunnel-based dams. Srinagar dam was earlier supposed to be dam-based but it has now been changed to a tunnel-based dam.

But is it not too late as far as Tehri dam is concerned?
Because of this (incident), we have issued a warning that all the technical experts involved in constructing tunnels should come here and see what have been the shortcomings and learn from them so that they are not repeated in other places.

Will the technical committee, besides investigating this accident, also look into the safety aspects of the dam?
Tiwari referred the question to R D Prabhakar, executive director, THDC. Prabhakar said:
The safety aspects have already been settled. So now the committee will specifically look into this incident.

Tiwari's comments on Prabhakar's reply:
(Be careful) These press people will catch hold of you tomorrow.