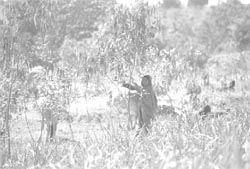 A micro-watershed management project was launched under the Rajiv Gandhi Mission for Watershed Development in this village of Jhabua district in 1996. Since then, a lot has changed. The underground aquifers have been recharged and all the eight handpumps in the village yield water throughout the year, says Bhurji Bhawar of the village's watershed committee.

According to R K Gupta, additional chief executive officer of the zila panchayat (district council) of Jhabua: "This change has only been possible because of people's participation. Most people who used to migrate from this village do not leave now. They have found employment here itself." Even in the face of the present drought - it only rained about 439 mm against the annual average of 980 mm - they are doing quite well. They are confident that their handpumps are not going to dry up very fast. "In the past four years, we have been able to catch enough rainwater through the micro-watershed projects in this area," says Kasani Bai, president of the village's Baira ni Kuldi , a women's self-help group. Earlier, even normal years proved to be difficult as there was no water in the area. Today, not only has the cultivable area increased due to water availability but their yield per hectare has also doubled, says Gupta (see table: The watershed boom ).

Mohan Singh, sarpanch of Umari panchayat which is about 30 km from Ghelhar, told Down To Earth that after facing severe crop damages and a drinking water crisis, people in Umari have realised the importance of wm projects. "They are now demanding wm projects in their villages. They know plenty of water is available in areas under wm ," he says.