Gold mine spills cyanide in Ghana 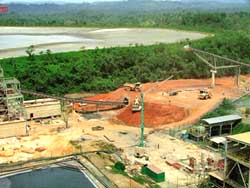 Following two cyanide spills at the Bogoso-Prestea mines in western Ghana in less than two years, residents of the area and several organisations are now calling for a total audit of all operations of the multinational gold miner, Golden Star Resources. The residents are particularly angry about the latest spill, which occurred just three months after the company signed the International Cyanide Management Code.

The spill occurred as cyanide-laced tailings (mine waste) leaked from the mine's tailings dam into the Ajoo stream, a tributary of the river Aprepre and the only source of water for the nearby community. An earlier cyanide spill, reported on October 23, 2004, had also contaminated the river Aprepre. In both instances, some villagers consumed water or fish from the river and fell ill. But no independent health investigation has taken place in either of the cases. Ghana has recorded more than nine cyanide spills since liberalisation of the mining sector in the 1980s.