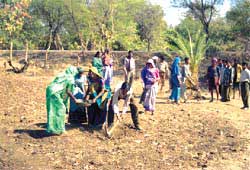 To fight drought, the Madhya Pradesh government embarked on a water conservation drive in February this year with its Pani Roko Abhiyan (Stop Water Campaign). The state administration geared up to reach all its 52,000 villages. It was inspired by an earlier effort of the state to conserve water through gram panchayat (village council) members. In 1999, chief minister Digvijay Singh asked the panchyat members to take up at least one water harvesting structure in their village. This gave birth to the EK Panch Ek Talab (a pond for every panchayat member) concept . Through competitive populism, it resulted in the renovation of 3,412 tanks and the construction of 500 new ones within 15 months. Of the total cost of Rs 16 crore, one-fourth was contributed by the community.

The Pani Roko Abhiyan, unlike the previous efforts, looked at the entire community as a stakeholder and not just the member of the panchayat . This resulted in the making of 700,000 structures, which can irrigate 55,000 hectares of extra land with an estimated 9,487 lakh cubic metre of water impounding capacity.

Ministers and officials travelled to each and every village of the state to popularise water conservation. During the campaign people were asked about their demands and told about the method of water harvesting suitable for them.

While watershed activities under the government's Rajiv Gandhi Mission are limited to just 7,500 villages, the Pani Roko Abhiyan, billed as the second-generation watershed mission, is a strategic shift towards a mass movement for water conservation.