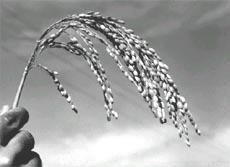 In India, over 18 per cent of the children suffer from vitamin A deficiency (VAD). Ingo Potrykus, professor emeritus from the Swiss Federal Institute of Technology, claims to have a solution. Potrykus had read a World Health Organisation (WHO) report that stated that 230 million children are at risk of VAD and a UNICEF report that vitamin A supplements could help avoid almost one in four of the one million VAD cases. So he proposed to improve the content of the missing micronutrients in major staple crops.

In August 1999, his lab announced the creation of