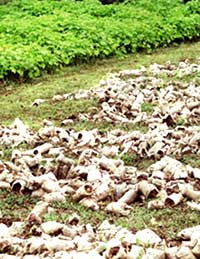 With 40 per cent of its land under forest, and the reputation of being India's rice bowl, Chhattisgarh is a natural choice for promoting cultivation of plants of biodiesel value. But it takes more than good conditions to push such a major move: political will. Chief minister Raman Singh has backed the state's biodiesel programme, most prominently by running his car on biodiesel for the last few months. D N Tiwari, deputy chairperson of the state's planning board, was formerly a member of the Planning Commission of India, where he headed the committee on biofuels in 2002. The state is leading biodiesel production. The national mission is yet to kick off.

In January 2005, the Chattisgarh Biofuel Development Authority (cbda) was created to coordinate the state's ambitious plans to reclaim wastelands and create rural employment through jatropha cultivation. Its target: covering 300,000 hectares (ha) by 2007. This is 2.2 per cent of the state's total geographical area. By 2010, the state plans to cover 1,000,000 ha under jatropha. By then, says A K Shukla, executive director of cbda, Chhattisgarh will need an estimated 1.5 million tonnes of jatropha seed and 500,000 tonnes of biodiesel on a yearly basis.

In the initial phase, the government is encouraging nurseries and distribution. Up to 500 plants are free of cost to farmers; thereafter, it costs 50 paise a sapling. ngos, panchayats and cooperatives can buy saplings for Rs 1.50. Simultaneously, it is promoting private sector investment in contract farming, oil-expellers, and transeseterification plants.

Tiwari claims 92 million saplings have already been planted this year. An average of 2,500 plants are estimated in each hectare, which means up to 40,000 ha is covered. In 2006, the plan is to distribute 200 million saplings. The fd provides the seeds, apparently selected and tested for yield and oil content. Seed collection for 2006 began in October through about 900 minor forest produce (mfp) cooperatives that will buy jatropha and karanj seeds from growers and collectors at the minimum support price (msp) of Rs 4.50 a kg. The question is: who will plant and on whose land? Land is precious in Chhattisgarh (see box: Land for oil...), and a lot of conflict happens for control over it. What is also critical is the arrangement industries will have with farmers. As for value addition, the government has already set up a biodiesel processing plant. But most of value addition will be done by the industry.

Red carpet to industry
Funds and programmes of various ministries are being pooled for biodiesel. The government has issued a circular to departments involved, urging them to prioritise jatropha plantation. About 60-70 per cent of the land