A thirsty city in the desert 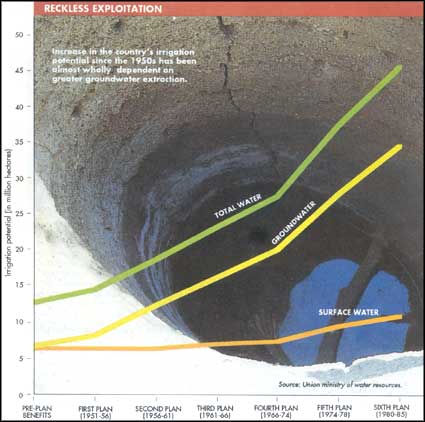 IN THE wake of a severe drought in Jodhpur in 1970, the public health engineering department (PHED) decided to obtain water from the countryside around the city as an emergency measure. Rampura-Mathania was chosen because of its high water table.

The PHED installed 26 tubewells in Rampura-Mathania with a total capacity of 4 million litres a day -- about 5 per cent of the city's demand -- and laid a 30-km pipeline from there to the city. But after the crisis abated, the emergency measure was not withdrawn "because the demand for water, in the meantime, had shot up", according to Magharam Parihar, PHED additional chief engineer.

None of the tubewells have dried up and the department has installed a few more. But Parihar says the total availability of water from Rampura-Mathania today stands at no more than 2.5 mld. Meanwhile, more than 1,000 private tubewells have been drilled for irrigation.

During the 1980-81 drought, the PHED decided to obtain water from the Pal area on the city outskirts and installed 17 tubewells. Pumping from the Pal area continues even today and the tubewells that were designed to provide about 9 mld of water now yield no more than 3 mld because the water table has dropped by about 50 metres. Some tubewells have even dried up.

The third emergency came during the drought of 1987 and the PHED responded by drawing water from Tinwari-Balarwa, 40 km from Jodhpur. The 18 tubewells installed there had a capacity of about 9 mld, but output now has fallen to half the installed capacity. To meet the shortfall, Ransigaon, about 80 km from Jodhpur, was identified as a source, although the quality of the water there was not so good. "But it was the best available," says J Venkateshwarlu, director of the Central Arid Zone Research Institute.

The people of Ransigaon, however, did not allow the PHED to take their water for Jodhpur and chased away the drilling staff. Senior district officials and political leaders intervened and a compromise was worked out whereby villagers would have access to part of the drinking water. The villagers do get some water today, and a 16-metre fall in the water table is perhaps considered a small price to pay for the facility.