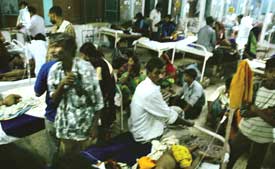 Whatever the disagreements about the respective roles of the public and private sector in providing medical education, it is clear that the way the system works at present does not help address the health care needs of the majority of the people. This point is important: blaming individual doctors for not performing social service is pointless. The system hasdisincentives for participation in public health activity.

Qualified doctors don't want to work in rural phcs where they would also have to discharge non-medical functions. Then there is the problem of shortage of medicine and equipment, and other elements of infrastructure. There are rules about compulsory service in rural areas, though they differ from state to state. Medical students are supposed to sign a bond saying they will work in villages for a stipulated period. But in most cases, states are unable to provide jobs. Vacancies are often not filled because governments do not have the money to pay salaries. "There were quite a few of us who wanted to serve in the rural areas in Madhya Pradesh after graduating but the government freed us from the bond saying that they did not have any positions,' says Jacob Puliyel, a paediatrician at St Stephen's Hospital, Delhi, who graduated from the Netaji Subash Chandra Bose Medical College, Jabalpur. Ajay Gambhir, honorary secretary, ima, who studied at the Mahatma Gandhi Institute of Medical Sciences, Wardha, Maharashtra, faced exactly the same problem. The national health policy also suggests that a two-year rural posting should be enforced before awarding the graduate degree, but the idea remains strictly on paper. "Before getting their degree in hand, doctors should be made to work for three years in rural areas, this way they will pay for their subsidised education. They should get a certificate from the community to show that they have really worked,' Sathyamala says.

State governments, however, say they have tried to give incentives to doctors