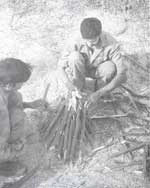 THE scorching sun fissures the salt-encrusted soil of the desolate Bhal, the region near the Gulf of Khambat in Gujarat. In the midst of this, the Vankars, traditionally weavers and agricultural labourers, have transformed wastelands into green acres through cooperatives, helped by the Behavioural Science Centre (BSC), an Ahmedabad-based NGO. What grows is not just trees, but pride, hope and self-assurance.

The Vankars have come a long way since the BSC exhorted them to get organised 16 years ago in a villagers' meeting at Golana, 25 km from Khambat. An unimpressed Ponchabhai, then 33, had got up and said, "We know we must stand together. But first we have to eat." Landless agricultural labourers, the Vankars worked the fields of the darbars (the landed class), and were heavily in debt to them.

Says Prasad Chacko, project officer, BSC, "We thought of exploiting the saline wasteland, the only natural resource here." And so were born the Tree Growers' Cooperatives (TGCS). They served a dual purpose -- barren land was given tree cover, poverty alleviated through the income from them.

Operating within the framework of the Gujarat Co-operatives Act, 1960, the tgss require a minimum of Rs 500 as share capital -- raised from the members -- before registration. Every household has 1 member in the general body. No tgc is formed unless all the households of a community participate. The decision-making powers lie with an 11-member committee elected from the general body. The Bhal tgcs lease government wastelands for 15 years. Some have obtained surplus land under the Land Ceilings Act.

Only ganda baval (Prosopis juliflora) grows in the region's saline soil. Plantation involves making 3-feet high bunds and a network of gutters. After the 1st rainfall in June, water is stagnated for 10 days in the bunds to dissolve the salts in the soil. It is then drained out through the gutters. This is repeated during the next rain, but this time it is allowed to seep into the soil. Says Amrut Patel of the BSC, "The excess salt gets washed out, while the remaining gets suppressed."

Charcoal-making is currently in progress at the 33.6 ha tgc plantation in Vainej village, 28 km from Khambat town. Felled trees are chopped into foot-length pieces, the wood arranged in concentric circles and covered with a layer of mud. Set alight, the wood smoulders for 6-8 days, yielding charcoal.

The decision for value addition at the source is based on sound economics. Four kg of wood produces 1 kg of charcoal, which sells for Rs 55-60, while 1 kg of firewood sells for Rs 8-10. Considering the number of licences and permits required for charcoal-making, the cooperative decided to give the job to a contractor for Rs 120,000 for the job.

Says Premjibhai, chairperson of the 51-member co-operative, "We used Rs 74,000 to buy 0.5 ha of land to house some villagers." Next year, the cooperative will fulfil a long cherished dream. "The leaves shed by the trees have made the soil fertile. We are going to start cultivation here. Members will be able to take the land on rent," says Premjibhai.

Blood for their land The road from chronic indebtedness, bordering on becoming a bonded labour, to cultivating one's own land has been strenuous. Nine years ago, when the cooperative was given 13.36 ha of land under the Land Ceilings Act, the rest of the village was not pleased. "They came with lathis, threatening us with dire consequences if we took the allotted land. But we decided we had to take it; it was ours," says Premjibhai.

At Golana, a martyrs' memorial mutely testifies to the continued intimidation. Here, the issue was 1.5 ha of wasteland, allotted to the village for housing. "The darbars threatened to teach us a lesson if we built the houses," recalls 48-year old Ponchabhai.

One such meeting, on January 25, 1986, was attacked by 50-60 armed darbars from the village. "They wanted to eliminate 4 or 5 informal leaders," says Ponchabhai. We ran in different directions. They fired at me, but missed. I ran to the next village, where some shepherd women sheltered me. They killed my son." Three other villagers were shot dead on that fateful night.

The darbars intended suppression; the effect was the opposite. "Dukh hua, par himmat nahin hare. (We were traumatised, but remained determined) We knew that if we didn't unite, not 4 but 400 would die," says Ponchabhai. An fir was lodged and for the 1st time in the Bhal. Fourteen darbars were convicted. Adds Jayantibhai Chauhan, also from Golana, "No darbar had spent even an hour in jail before this."

The incident was a milestone, spurring on the nascent cooperative movement. The cooperatives, covering 2500 families in 42 villages, are now nearly self-sufficient. The BSC continues to provide moral and technical support to the Vankars.

As the guardian angel of all the cooperatives, the Federation liaises between the people and governmental agencies. It has often cooperated with the local panchayats in ensuring amenities like street lights, roads or potable water. As Ponchabhai, who is the managing director of the Federation, explains, "A villager asking for something at the taluka office will be ignored. But if someone from the Federation goes, he gets attention. People listen to us because they know we have 2,500 people behind us."

The cooperative members are independent decision-makers in their own affairs, turning to the Federation for help only when required. But women are not involved in any way. No co-operative has women members. Says Premjibhai from Vainej scornfully, "Of course we have no women. Why should we, when the man from every house is a member?" The women, like Amarbehn of Golana say, "These men have their co-operatives. We have nothing." At the cooperative meetings, women are reduced to being ushers. In their magnanimity, the men sometimes let them peer through the windows.