Who gains from the biodiversity treaty? 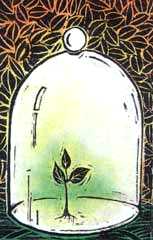 Genetic Resources Action International (GRAIN), a Barcelona-based, non-governmental organisation, contends the convention was "largely manipulated by the Americans and is extremely weak and even counterproductive in several respects."

One issue in the convention relates to gene banks. The convention excludes from the agreement all stored genetic material, which was collected and established before the agreement came into force. Explained a senior FAO official, "This is tantamount to consecrating the piracy of the South's germplasm."

As much as 60 per cent of all Southern collections are in gene banks in the North and 85 per cent of the global microbial collections and livestock foetal populations in storage are under Northern control. Their exclusion from the convention is the "equivalent of giving the North an untouchable Swiss bank account for seeds, soil and semen," says GRAIN.

The tussle over the South's genes is not new. Almost 20 years after the International Board for Plant Genetic Resources was created, roughly 20 per cent of the world's seed collections are banked in the network of international agricultural research centres and this has sparked an acrimonious, North-South battle over ownership and access to genetic resources.

By the early 1980s, Northern governments were beginning to talk about the need for a "full and free exchange of germplasm" and to call on the world to consider plant genes as a common heritage of humankind, while simultaneously patenting their own breeder varieties. In 1983, an International Undertaking on Plant Genetic Resources (UPOV) was prepared, endorsing the principle of free exchange of genetic resources and calling for recognition of farmers' rights. Thus, in one stroke, the South's natural wealth became a "common" resource. The sop offered to Southern governments was that in exchange, they would be allowed access to their own genes now stored in Northern banks and also to "advanced" varieties. However, in 1990, just as discussions on the biodiversity convention began, the North exerted the pressure needed for plant breeders' rights to be recognised and formally removed from UPOV. FAO officials say the "deal" was that farmers' rights -- the term refers to farmers and tribals who nurture and conserve seeds on farms and in forests, as opposed to breeders who develop varieties in laboratories -- would be included in the biodiversity convention.

The South lost on both counts and, now, under the convention, the wheel has turned a full circle: from nationally owned germplasm to common heritage to nationally owned again. Only this time, the owners are the North.

There are indications the administration of US president-elect Bill Clinton will sign the biodiversity convention to prove its environmental credentials. But, according to highly-placed sources in UNEP, it has already submitted a list of "amendments."

The US wants the convention to be in line with the ever stringent intellectual property rights (IPR) system globally. The biodiversity convention states that in return for the basic genes the South provides, it will have access to biotechnologies developed in the North. But while it says technology will be transferred in accordance with international law, it asks countries to see that IPRs do not "run counter to the objectives of the convention." Under pressure, even this access may be lost.

The US wants no mention of indigenous communities being party to the benefits of biodiversity as it fears this could open up a Pandora's box in sharing the gains with the American Indians. It has also raised tricky issues of finance for developing countries as well as objections to regulations on the biotechnology industry. The negotiations are only beginning.