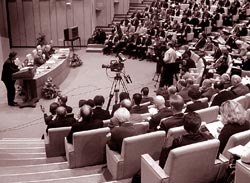 the Kyoto Protocol on global warming is just a step away from becoming an international law. On September 30, 2004, a major hurdle was crossed when the Russian cabinet approved the treaty and sent it to the lower house of parliament, the Duma, for approval. The Duma would take up the resolution for debate in October 2004 and indications are that it would pass the treaty.

A fortnight ago, it seemed Russia's decision on the treaty would get further delayed. While deputy prime minister Alexander Zhukov sought more time to prepare an official report on the treaty that was to be submitted to Russian president Vladimir Putin in August 2004, the draft of this report was reported to be critical of the pact (see Down To Earth,