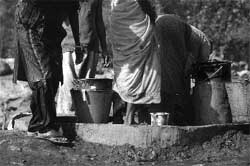 delhi has faced yet another cut in its water supply due to pollution in its prime source of drinking water - the Yamuna. Between February 17 to 20, the Delhi Water Supply and Sewage Disposal Undertaking (dws&sdu) had to cut down by half the drinking supply from their Wazirabad treatment plant as chemists noticed high levels of ammonia in raw water.

Som Dutt, director, dws&sdu and in-charge of the Wazirabad treatment plant said: "About 1.8 mg/l (ammonia) was recorded, which is above normal. This has increased the consumption of chlorine by about 23 per cent." Usually the ammonia levels are below 0.5 ml in the raw water and should be absent in the treated water.

About 70 per cent of Delhi's water supply comes from the Yamuna which is highly susceptible to pollution from industries, municipal sewers and agriculture fields laced with fertilisers and pesticides.When raw water pollution crosses acceptable limits, the load to treat conventionally with alum and chlorine increases.

"There should be no ammonia in drinking water," says A Manoharan scientist at the Central Pollution Control Board (cpcb). "The production of the plant has to be stopped till the quality of water improves," says a scientist.

On February 17, officials on duty noticed the high levels of ammonia in the raw water. dws&sdu chairperson Yog Dhyan Ahuja sent telegrams to the Haryana government, the Union government and the Central Pollution Control Board (cpcb) seeking their intervention. Dutt points out that ammonia pollution come from drain no 2 and drain no 8, that discharge into the river waste from Sonepat and Panipat in Haryana respectively.

Scientists point out that pollution load in the river mounts immediately after rains as surface run-off from fields and industry waste sites enter the river. Delhi experienced heavy rainfall in Delhi and surrounding areas in February. It is not the first time that the plant had to be shut down due to ammonia pollution. In January last year, there was a similar closure. In 1994, the Wazirabad plant had to be closed down 13 times.