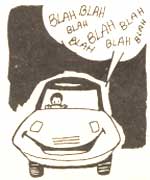 BRITAIN'S Automobile Association has developed an in-car navigation system that not only locates the nearest car park, but also tells you whether there is enough space available in the facility or if the route is congested, This is one of the several applications of the geographical informstion systems (GIS), which bring maps to life on a computer screen. Visual display of corporate information, cellular radio networks, sewage systems and tube tunnels are other communication possibilities.

The public utility sector was the first to use such systems in the UK. But too retail and transport industries are as likely to exploit these possibilities. The city of Lyons in France plans to use thi system to manage its parks and trdens, to analyse the effect of roWorks on traffic flow, to control traffic, lights and eventually for route planning devices in cars.