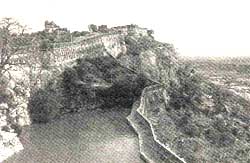 TO THE thousands of tourists who flock every year to Chittaurgarh, the best known of Rajasthani hill-forts is an impressive reminder of the golden years of Rajput chivalry and the courage of Rajput wives, who would immolate themselves on funeral pyres rather than submit to the enemy. What the tourists do not know is that Chittaur was also a marvel of water harvesting, whose stored supply enabled the residents to withstand sieges of even upto 12 years.

Fortified cities and hill-top forts were a feature of pre-British India and even squalid towns and villages could boast of one of these majestic structures. The forts were unique in the way their design incorporated the local topography to maximum advantage, both for defence and also to ensure efficient harvesting of life's necessities, such as water.
Strategic location There is little authentic research available on the architecture of forts in relation to the seasonal direction of the sun and wind and the availability of water. However, it can be safely surmised that these were important considerations in the design and construction of a fort. An essential condition in fort architecture was a water harvesting system sufficient to meet the needs of its inhabitants in both war and peace. Forts built on hill-tops collected rainwater, while those in the plains were located near a river so its water could be harnessed for domestic and defence needs.

The fort at Chittaur was built by the Maurya ruler Chittrangada. From the 8th century to the 16th century it was ruled, in turn, by the Guhilas, Pratiharas, Chalukyas and Sisodias, all of whom used Chittaur as their capital. The fort dominates the top of a huge, oval hill and soars 152m above the plains. Steeply sloped sides make it well-nigh inaccessible. The hill is bordered on three sides by the Banas, Gambheri and the Belwa rivers.

James Todd, a British administrator and chronicler who visited Chittaur on February 27, 1822, quoted a description of the fort from the 9th century text Khuman Raesa (Story of Khuman Rawat): "Chitrakot (ancient name for Chittaurgarh) is the chief amongst 84 castles and is renowned for its strength. The hill on which its stands, rises out of the level plain beneath and is the tilak on the forehead of Avanti (the earth). It is within the grasp of no foe, nor can the vassals of its chief know the sentiment of fear. Ganga flows from its summit; and so intricate are its paths of ascent, that though you might find entrance, there would be no hope of return. Its towers of defence are planted on the rock, nor can their inmates even in sleep know alarm. Its kothars (granaries) are well-filled, and its reservoirs, fountains, and wells are overflowing. There are 84 bazaars, many schools for children and colleges for every kind of learning, many scribes and 18 varieties of artisans."

Chittaur came under attack many times because of its legendary wealth and its strategic location on the road from Delhi and Agra to Malwa, Gujarat and the Deccan. The capture of Chittaur so it could became the base for military operations toward the south and west was given the highest priority by the Mughals. Three times this great fortress was captured after fierce battles. The first defeat was in 1303 by Allaudin Khilji, the second in 1535 by the Sultan of Gujarat, and finally, in 1567, by Emperor Akbar. But what is environmentally interesting about Chittaur is the manner in which its residents ensured an adequate water supply. Always vulnerable to attack, forts -- and especially Chittaur -- were besieged often for months on end. This meant the fort could hold out only if its stored water could last for months. This, the fort-builders ensured by a commonsense harvesting of rainwater, even in the most inhospitable areas.

There are no records of how many people lived within Chittaur fort, but a rough estimate can be worked out on the basis of other references. For instance, when Allaudin Khilji mounted his final assault, 13,000 Rajput women reportedly committed jauhar (self-immolation). And, when Akbar took the fort, 32,000 Rajput warriors were killed in battle. So, it would be reasonable to assume that at least 30,000 people lived in Chittaur at any given time, along with their elephants, horses and cattle. Even today, the fort's population is about 5,000.

Sustaining such a large population necessitated ensuring water was harvested within the fort itself in sufficient quantity. Ghanshamji Bhatnagar, a guide at the fort, said there used to be 84 water bodies within its walls, but many have disappeared over the years, including almost all those that did not have a stone or masonry lining. Some reservoirs also vanished because the land was reclaimed for agriculture. Nevertheless, in existence still are at least 22 major water bodies, including, talabs, kunds, bavdis, (stepwells) and wells. The biggest is the Chatrang Mauri Talab, which, like all the talabs in the fort, have natural catchments. Below the talabs are the kunds and bavdis. They differ in that a kund may or may not tap the groundwater reservoir but a bavdi always does, and a kund is stepped on all four sides, whereas a bavdi has steps on only one side.

The builders of Chittaur not only harvested surface water but also groundwater seepage. Thus, Surya Kund is located below Kala Nada Talab, Khatan Bavdi is below Fatehjika Talab and Bhimlat Kund is located below Sukadiya Talab. This ensures that even if the water in the talab dries up, its seepage can still be obtained from the kund or the bavdi below it. In fact, the Gaumukh spring was formed by seepage from the Hathi Kund, which, in turn, was recharged by seepage from the Fatehjika Talab.

The total area of Chittaur fort is about 500 ha and the total area of all the reservoirs inside the fort comes to roughly 200 ha. As the average depth of the reservoirs is about two metres, upto four billion litres of water could be stored in the fort's reservoirs. With an average rainfall of 700 mm, the total rainfall that could be harvested from an area of 400 ha is three billion litres. If daily consumption per person is set at 20 litres, annual water consumption by the 30,000 persons within the fort would be about 0.2 billion litres, leaving a margin sufficient to meet even extreme contingencies.

Chittaur's reservoirs, however, were built to contain much more water than the average rainfall in a year. If the rainfall was more than normal in any year, the extra rainwater could be stored for the next year, which meant that if a seige stretched on for upto two years, the inhabitants would not run out of water. All these figures show that even after accounting for losses from seepage and evaporation and the watering of animals, upto 50,000 people could live in Chittaur for about four years, even in the absence of rain. Chittaur folk history recounts a 12-year siege that took place some time in the 9th century.

Sanitation and hygiene
Today, however, many of the fort's water bodies lie in ruins and create an impression that those who lived in the fort in former times, lived in unsanitary conditions. But the older residents of the fort pointed out there were strict rules governing sanitation and hygiene. Upstream water bodies were demarcated for drinking purposes and those downstream for bathing. Cattle were barred from grazing in catchment areas and human waste from latrines was carried away by scavengers or flushed out from buildings with gravity waste disposal systems. The night soil was used as manure for trees and plants that grew in abundance throughout Chittaur. Sangram Singh, who operates a tea stall inside the fort, said, "Rules of sanitation was a way of life for our ancestors. After all, they could not take the risk of water contamination, which would have meant the death of all the people."

But modern human inventiveness is far less ingenuous. Today, Chittaur fort is one of the few in the country in which people live. The Rajasthan public health engineering department (PHED) pumps 67,500 litre of water per day from tubewells and dugwells on the plains, using a 17.5 hp pump for 16 hours a day.

Ironically, modern Chittaur, a motley collection of buildings at the foot of the fort, has faced a water problem over the past few years. The problem could be easily solved by using water stored in the fort, but PHED engineers insist this water is not potable, even though in extreme water shortages in the past, they have had no qualms about using it.