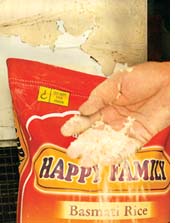 more rice varieties will soon wear the basmati tag in India. The draft definition of basmati by the Union government has sparked a debate over whether new and evolved varieties should be allowed in place of traditional varieties. While only six traditional varieties are now called basmati, the draft of the ministry of agriculture proposes to clear six more. This is said to help traders.

There are concerns about inferior varieties entering the basmati basket. A scientist at the Central Rice Research Institute, Cuttack, says the move will help foreign traders pass off inferior rice as basmati. But India and Pakistan are trying to attain geographical indicator status for basmati to counter imitations.

K V Prabhu of the genetics division at Indian Agriculture Research Institute (iari) says traditional basmati varieties lack resistance against diseases and give low yields. iari is the chief proponent of the new definition. "The effort is to maintain the qualities of the traditional rice, while increasing resistance and yield,' he says, adding that low-quality varieties with a similar genetic profile will be part of the new definition.