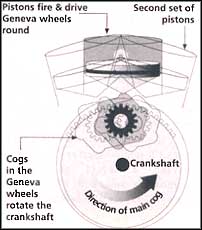 THE expression sinall is beautiful has been proved true in the case of the internal combustion engine. Rick Mayne and his colleagues at Split-Cycle Technology in Arundel, Queensland, Australia, have substituted a few large pistons with scera small ones in a 2-stroke engine and claim that this would sharply reduce energy losses and wear and tear that friction between the moving parts and vibrations cause (Vcw Scieritist, Vol 146, No 1977).

The new engine, called the splitcycle engine, would ensure almost complete combustion of the fuel and so emissions would be virtually rwn existent. The scientists also claim that the new engine could run on low-grade fuels such as coconut oil and fuel mixtures containing up to 60 per cent steam by volume.

Mayne used several small pistons firing together instead of the traditional single firing at a time of a few large pistons to drive a 2-stroke engine. The claims that this substitution of pistons enables not only a more efficient combustion of fuel, but also makes for the pistons to be fired at a slower rate (because there are more of them now thereby reducing w car and tear.

Mayne's engine is circular with the crankshaft in the centre. Forty-eight pistons are spread out along the rim of the circle and 24 of them fire simultaneously. "What we have is a constant breathing motion, with 24 (pistons) in and 24 out," says Mayne.

The split-cycle engine is to undergo independent testing at universities in the us and Mayne and his colleagues are preparing to test it for the first time in a vehicle, "We are very close to running one in a motorcvcle, " says Mayne.