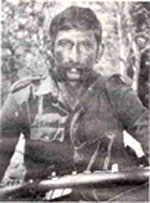 Sandalwood smuggler Veerappan's charter of 10 demands to the Tamil Nadu government as the precondition for releasing 3 hostages may provoke the final offensive against him by authorities.

In a message sent through his brother Arjunan, Veerappan has declared his acquiescence to surrender and release of deputy superintendent of police Chidambaranathan who was abducted in Coimbatore on December 3 along with 2 relatives, based on a written assurance of general amnesty to his gang from President Shankar Dayal Sharma. Other demands include a 100 year license for blue metal quarrying in Kollegal taluk of Karnataka, action against officials who "trespassed human rights" in attempts to capture him, a game license along with ammunition and Black Cat protection to the gang.

Veerappan's earlier demands of withdrawal of Special Task Force (STF) and other police forces from the area and lifting the ban on food supplies going to him have been met by the government. This conciliatory approach, however, is not likely to be continued. In fact, the abduction and subsequent exhaustive list of demands are being seen as the last derring-do of a smuggler pushed to the wall and seeking a way out without losing his pride.

Meanwhile, STF personnel are reportedly gearing up for a possible strike on Veerappan's hide-out. State chief secretary Haribhaskar categorically stated that prison terms had been served by bandits Phoolan Devi and Man Singh whom Veerappan had cited as examples of recipients of amnesty.