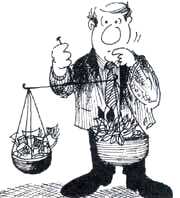 WHAT IS the ordinary citizen who is environmentally concerned to do when bombarded from all sides by contradictory claims about a product's recyclability? Should one buy beverages sold in cans made of steel or aluminium? Or, diaper a baby with disposables or reusables? And, when is paper truly recycled -- when the waste used is, in industrial jargon, pre-consumer or post-consumer?

The clash of the beverage cans renewed with a clang with the introduction of a push-button opening system trade-named Ecotop, which the steel industry is hailing as "the beverage can of the future, made from recyclable, energy-efficient steel". Steel industry spokesmen in Britain boast it cost L25 million to develop Ecotop technology.

The steel industry's claim, however, drew only a disdainful sneer in response from aluminium beverage can manufacturers, who are on a roll having grabbed an increasing market share in recent years. "We believe that steel technology is a long way behind and are now desperate to catch up," said a spokesman for the trade body for aluminium can recycling. Well-planned ad campaigns extolling aluminium's environmental virtues such as a recycling rate of 63 per cent and the existence of 350 recycling centres and 1,160 supermarket can-collection points in Britain alone are expected to result in aluminium raising its share of the beverage can market from 60 per cent this year to 80 per cent in 1993.

Meanwhile, a reinvigorated steel industry is gearing up its media blitz highlighting such messages as making a steel can takes just half the energy used for an aluminium can and that, unlike aluminium, simple magnets can extract steel cans from a waste conveyor belt. These ads won't mention that installing the required magnetic extractors would cost about L15,000 each. Steel can manufacturers also will stress that Ecotop cans can be made in a single process, thereby lowering production costs, whereas cans being made now need a two-step process because they have to be patched with aluminium ends with pull-out tabs. Ecotop cans are being tried out this year in the Netherlands and a minor chain of grocery stores in Britain.

Despite tall claims in the paper industry about "eco-friendly" paper, a study published in Worldwatch magazine says most of these claims are bogus and most printing and writing paper is still bleached white by chlorine processes that are ecologically damaging. A byproduct of chlorine bleaching is dioxin -- an extremely toxic substance. Besides continuing to strip the world of an estimated 4 billion trees annually and dumping 950,000 tonnes of highly toxic effluents into rivers and emitting 100,000 tonnes of acid-rain producing sulphur dioxide and 20,000 tonnes of chloroform into the atmosphere, the paper industry is a major user of fossil-fuel generated electricity. As for paper touted as recycled, only when so-called "post-consumer" waste -- waste paper that has actually been used and discarded by the consumer -- is used does recycling accomplish what the public understands this term to mean -- reducing the cutting of trees and waste paper flow to landfills. Yet most of the paper labelled recycled is made from pre-consumer waste -- waste produced during the production process itself -- and that is merely re-routing the process discards during manufacturing. For example, in a typical recycled magazine paper made by a US manufacturer this year, the total recycled content was found to be 50 per cent, but the post-consumer content was only 10 per cent. Truly recycled paper is still a rare find.

Determining environmental truth can often be daunting -- as Dutch researchers can testify, for it took them 123 pages of words, charts, tables and footnotes to answer the question: Which of the following is more environment friendly -- china cups, styrofoam (polystyrene) mugs or paper cups? After minutely studying the life-cycle of a cup in each category, from extraction of raw material to disposal of the used product, their answer is: It depends on how often the cup is used and how often it is washed, for what matters in the end, ecologically speaking, of course, are the amount of water and cleansers used to clean the cup before use and the energy consumed if the washing is done in a dishwasher. It goes without saying that paper cups use the least water -- but that's only because it's difficult to reuse for a paper cup gets mangled when washed. On every other environmental count, paper cups were found to do more harm than styrofoam cups.

China cups, on the other hand, are handicapped because they need to be washed and the Dutch study shows that irrespective of how many times a china cup is used, its effect is harsher on water than disposable cups because of the detergents used. The study also shows that washing a china cup just once in a dishwasher has a greater impact on the water than the entire life-cycle of a paper or styrofoam cup.

However, when other parameters such as impact on air, energy consumption and landfill volume are measured, a transition point will be reached after which the environmental impact of china cups starts becoming less severe than cups in the other two categories. The Durch researchers calculated the transition point in their study to be 1,800 -- that is if a china cup is used and washed more than 1,800 times, its impact begins to be less harsh on the environment than styrofoam or paper cups, except of course in its impact on water. (See table) Equally confusing to the consumer is whether disposable or reusable diapers are more environment friendly. A British group called Women's Environmental Network (WEN), along with other consumer groups, are lobbying for reusable diapers as they "don't cost the earth". This has led many parents to revert to using cotton nappies that can be washed and reused. But, WEN points out, 70 per cent of new parents in Britain opt for the convenience of disposables despite their environmental shortcomings. WEN listed these as depletion of forests to meet the demand for fluffed paper pulp which forms the largest component of nappies; waterways being polluted by highly toxic effluents resulting from the use of chlorine to bleach pulp white, and the problem of disposal of the millions of soiled diapers each day.

All this would make it seem essential for the concerned consumer-parent to return to reusable diapers, so as not to tax the environment. But this matter is not that simple, for some recent studies indicate laundering reusable, soiled diapers uses up large amounts of water and soap or detergents and diaper-delivery service vans -- a common sight in the West -- burn up considerable automotive fuel and add to urban air pollution.