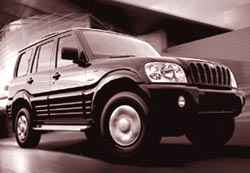 delhi has become the first city in the country to levy a pollution cess. State finance minister, A K Walia, announced an additional levy of two per cent on polluting diesel cars and multi-utility vehicles while presenting his budget on July 22, 2004. He said the step is aimed at making people shift to cleaner fuels for personal transportation needs. This cess will be imposed in addition to the ad-valorem tax rate, based on the price of vehicles, which has also been introduced in the state for the first time.

The government is also examining the possibility of imposing an additional entry tax on diesel vehicles registered outside Delhi to discourage their entry in the city. But it faltered on one point. Under mounting pressure from the diesel lobby, it rolled back its sales tax hike on the fuel by eight per cent. But the cited reason was a fear of drought and additional burden on farmers, who use diesel.

The automobile industry is piqued about the imposition of the pollution cess. "The step is retrograde and should not be introduced,' demands the Society of Indian Automobile Manufacturers. "The charge on diesel vehicles is discriminatory and not based on science. It discriminates between vehicles that meet existing emission norms and comply with all existing government regulations,' it argues. The industry's annoyance is understandable: the city has recorded a 106 per cent annual incremental increase in diesel car sales since 1999.

But the New Delhi-based Centre for Science and Environment (cse) said the industry's claims are misleading. Diesel vehicles emit more nitrogen oxides and particulates compared to those running on petrol. But the Euro ii emission standards currently in force in the city are discriminatory as they legally allow these vehicles to pollute more, it pointed out. Commending the new move, cse said the state's budget had addressed the public health imperatives of the situation for the first time. Countries like the us, Japan, Germany and Sweden had also acknowledged the toxic effects of poor quality diesel. Scientific organisations and regulatory agencies, such as the International Agency for Research on Cancer, World Health Organisation and the California Air Resources Board, have branded diesel particulate matter as a probable human carcinogen.

Meanwhile, vehicle dealers in the city are worried about the imposition of the ad-valorem tax rate too. They argue that it will increase the cost of vehicles in Delhi and instigate customers to buy them in Haryana, where the road tax is based on the weight of the vehicle.