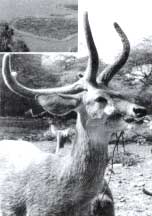 ONLY one of their kind in the world, the future of Manipur's floating islands is threatened by a power project in Loktak Lake at Keibul Lamjao. The area was declared the world's only floating national park in March 1997 and is the lone habitat of an endangered deer species.

A few years after it was declared extinct in 1951, the Sangai or Indian dancing deer was spotted in the floating islands of the Loktak Lake at Keibul Lamjao sanctuary in Manipur. All was well for the dancing deer until 1984. Their population had risen steadily mainly due to the conservation efforts of the state forest department. Their habitat was protected. And they continued to enjoy the luxury of being left alone to adjust themselves with the changes in the landmass brought about by the changes in seasons.

But now their nemesis has come in the form of the Loktak Hydro Electric Project. Commissioned in 1984, the adverse impacts of the project to the unique ecosystem were not taken into consideration during the planning stage. Now, the construction of the plant threatens the fragile ecosystem. The disappearance of 20 aquatic species has been reported since the inception of the project. The population of migratory birds and waterfowls have dwin- dled. And the Sangai is facing the greatest threat of all: its only habitat is on the verge of being destroyed.

Located in Bishnupur district of Manipur, the national park covers an area of 40 sq krn of the southeastern part of the Loktak Lake. It is unique in many ways. The Sangai (Cervus eldi eldi) is only found in Manipur, It is well evolved and adapted to the phumdis (local name for the floating landmass). Its hooves are wide, and pasterns are hairless and horny, thus providing great manoeuvrability. The phumdi is no ordinary swamp. It consists of a thick mat of soil, humus and dead vegetation in different stages of decay, upon which reeds and grasses grow up to a height of five metres. The thickness of the mat varies from a few centimetres to about three meters. It is a porous and spongy biomass capable of floating due to buoyancy. The phumdis house a large number of aquatic, semi-aquatic and terrestrial flora and fauna. But, more than this, there is a unique phenomenon associated with the phumdis which makes the Sangai habitat unparalleled in the world. In the dry December to February months, the phumdis sink to the floor of the lake, and gather nutrients from there. After the rains, they resurface again. The Sangai is well tuned to this rhythmic rise and fall of its habitat. When the phumdis start sinking, the deer moves to the upper reaches of the park.

The planners did not take the complex drainage pattern and the fragile ecosystem into account. Half-way through, the engineers realised that the lake did not have depth to generate power. As a result, they had to commission a barrage, known as the Ithai Barrage, further down the Manipur river.

The Loktak project had promised to generate 105 megawatt of power; irrigate 24,000 hectares of land; earn Rs 20-30 crore as state revenue; and enhance economic development. All this is turning out to be an environmen- tal disaster. It inundated cultivable land more than twice the area it proposed to irrigate, uprooted and deprived about 10,000 people of their livelihood. It has only been able to provide employment to 500 people directly and 2,000 people indirectly. Most importantly, with the construction of the barrage, the high level of water in the lake is flooding the surrounding areas. As a result, the rise and fall of the phumdis has been adversely affected. They no longer sink, are deprived of nutrients, and are dying.