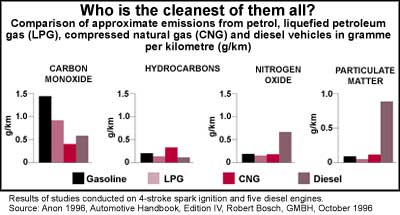 after compressed natural gas ( cng ), liquefied petroleum gas ( lpg ) seems to be the most favoured fuel in India for those who want to switch over to an environmentally-cleaner option. While cng has been introduced as clean automotive fuel in Delhi following the Supreme Court order of July 28, 1998, the Union government is yet to formulate a policy to allow lpg for automotive use.

Today, lpg seems to be a better option in cities where the infrastructure for the distribution lpg is already in place. This is because the supply of cng is limited to its pipeline network and therefore only a few cities such as Delhi, Mumbai and a few cities of Gujarat stand to benefit. But bottling and distribution units for lpg can be found in almost every state in the country. The biggest benefit of moving to gaseous fuel options is the substantial reduction in particulate matter that gets virtually eliminated when compared to diesel (see graph: Who is the cleanest of them all? ).

Legislative guidelines to allow lpg for automotive use have been on the anvil for a long time. But the government seems to be dragging its feet because of the conflicting needs of meeting both cooking and transport demands at the same time. Though exact estimates are not available, officials of the ministry of petroleum and natural gas ( mpng ) claim that the current registered demand for cooking lpg in Indian cities can be met fully by the year 2001. Therefore, supplying lpg for automotive use should not be a problem, they say. But Rajeev Sharma, managing director, Indraprastha Gas Limited, warns that if the demand for cooking lpg escalates in future and if rural areas are also brought within the ambit of cooking gas supply, then there will be a huge shortfall.

To examine the feasibility of supplying automotive grade lpg and the requisite amendments in rules to allow for automotive use, the mpng convened a meeting in April 1996 with representatives from the various agencies concerned. Two committees were formed - one to deal with legal issues, infrastructure, logistics, retail distribution, statutory rules and regulatory mechanisms and another to look into the technological aspects and fuel specifications. By January 1997, the committees submitted their report to the mpng .

In June 1997, the committees even formulated amendments to the lpg supply and distribution order of 1993 (gas cylinder rules), to allow automotive use of lpg . The Bureau of Industrial Standards (bis) had already proposed the fuel specifications for auto lpg but they are yet to be finalised. Still, there are several other regulations which need to be modified as well. These are the static and mobile pressure vessels rules, Liquefied Petroleum Gas Order, 1974, the Essential Commodities Act and section 52 of the Central Motor Vehicles Act (cmva). Despite these developments, the Union government has yet to draw out a clear policy on lpg. Says O N Singh, director, mpng: "The amendments will first be placed before of the cabinet, after which a decision can be taken."
Waiting in the wings Meanwhile, market pressure to allow lpg for automotive use is building up. Several manufacturers have started planning a number of products based on lpg and vendors have set up shops to sell lpg conversion kits. Even the Karnataka high court had ordered that all autorickshaws in the state must run only on lpg by January 2000. Bharat Petroleum Corporation Limited ( bpcl ) has set up a lpg dispensing/filling station at Vasant Vihar in Delhi. Multinationals are also joining the bandwagon and are planning to set up a lpg distribution network.

There is more to follow. Ahemdabad-based Rutu Auto Gas Private Ltd, is one of the many companies trying to enter the lpg conversion market. It has already converted a wide range of vehicles including a three-wheeler to lpg. "We have successfully converted many models of passenger cars to lpg. These cars have already been tested by the Automotive Research Association of India (arai) for safety and emissions. As soon as the government allows lpg vehicles on road, we will start with conversions," says Manish Dave, marketing manager of the company. Many automobile manufacturers have also developed lpg versions of their vehicles, which include the Ford"s Ikon, and the two-wheeler giant tvs Suzuki. Arun Sekri, senior manager, bpcl, claims that his company can supply auto lpg as soon as the government allows it.
The illegal market While the government sits tight on the amendment of rules, automobile mechanics have started retrofitting passenger cars with lpg conversion kits to run vehicles on cooking grade lpg , throwing all concerns for safety norms to the wind. In Kerala, there are more than 100,000 vehicles that are reportedly running on lpg , despite section 252 of the Kerala Motor Vehicles Act, which makes it illegal. In Calcutta, there are more than 300 cars reported to be running on lpg and in Delhi and Mumbai the numbers are estimated to be in thousands.

Down To Earth investigated this illegal conversion market in Delhi and found that these conversions were being done mainly by road-side car mechanics. Manmohan Sharma of Reliable Automobiles is one such mechanic who uses imported kits for these conversions. They are priced between Rs 7,000 and Rs 13,000 and for dilapidated vehicles, the cost is Rs 15,000. Raza Abbas of Sara Lee Gas claims that at least one conversion is performed every day in all the five branches he owns. Both Sharma and Abbas do not have any technical expertise and rely only on their experience of repairing automobiles to execute these conversions.

Meanwhile, the government has no clue as to how to deal with this rampant illegal use of cooking lpg . Alok Swaroop, secretary, state transport authority, says that there is a serious anomaly in section 52 of the cmva , because of which he is unable to take action against these offenders. This act states that "...modification of the engine, or any part thereof, of a vehicle for facilitating its operation by a different type of fuel or source of energy including battery, compressed natural gas, solar power, or any other fuel source of energy other than liquid petroleum gas shall be treated as an alteration." This can be interpreted to mean that vehicles converted to run on lpg are an exception and do not need the approval of any authorised agency.

Even the Society of Indian Automobile Manufacturers (siam) informed that this rule "does not regard conversion of petrol/diesel vehicles to lpg as an alteration and therefore the vehicle owner need not get the approval of the registering authority". The ambiguity in the rule allows the illegal conversion market to flourish.
An economical proposition It is obvious that more and more people are switching to lpg because it gives traditional fuels a run for their money. According to Sekri, the government, at present, gives a subsidy of over Rs 4 per kg on cooking lpg for domestic purposes. While diesel is priced at Rs 14 a litre and petrol costs as much as Rs 26 per litre, a lpg cylinder costs around Rs 155 and which works out to less than Rs 11 per kg. Therefore, the cost per kilometre with lpg fuel is less than half of that of petrol. Although the running cost of a cng vehicle is estimated to be less than that of a vehicle running on lpg , people prefer lpg as the initial conversion cost is low. Converting to cng costs between Rs 30,000-Rs 35,000, while the cost of converting to lpg is as low as Rs 10,000. Clearly, subsidy on domestic lpg is the reason for people using it on the sly.

Therefore, it remains to be seen how the market, which is so keen on lpg conversions today, will respond once the subsidy is withdrawn. The government has announced that subsidy on lpg will be removed from 2002, but official sources say that it can be removed even before the assigned time. Once lpg is allowed for automobiles, it is expected to cost as much as petrol. Still, the running cost of an lpg vehicle would still be much less - a little less than Rs 2 per kilometre as it is possible to get more mileage out of lpg compared to petrol.

The safety aspects of the illegal use of lpg is also a cause for concern. lpg could be even more hazardous in case of a leak as lpg is heavier than air and tends to hang in case of a leak, thus increasing the chances of a fire. cng is lighter than air and so disperses fast and is less inflammable. Car mechanics, on the other hand, hold that lpg fuel line is always laid outside the passenger compartment, away from exhaust pipes and other hot spots in such a way that even under abnormally-bad road conditions there is no mechanical damage to the tubes. Even if there is a major mishap, the fuel line can be cut as it happens with conventional gasoline cars, they say.

Clearly, the Union government needs to remove the legal snags and put in place the safety and emission norms for lpg vehicles for the maximum environment benefit and ensure its safe use.