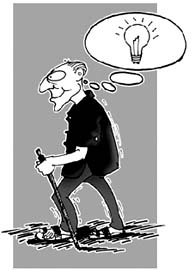 all those lazy bones who till now found walking or an early morning jog a difficult proposition, now have something to get them going. A recent study by Arthur F Kramer of the University of Illinois at Urbana-Champaign, usa, showed that aerobic fitness can improve executive control functions of the brain. Executive functions, controlled by the frontal and pre-frontal regions of the brain, include processing of relevant information and discarding distractions. The frontal and pre-frontal areas show negative metabolic and morphological changes during the normal ageing process.

The study examined the cognitive impact of walking (aerobic) and toning exercises (anaerobic) on 124 adults between 60 and 75 years. Briefly, Kramer and his colleagues randomly assigned these adults, who were leading sedentary lifestyles earlier, to either six months of aerobic walking or six months of anaerobic stretching and toning. The group, which had undertaken aerobic exercises, started with 15 minutes of walking three days a week, gradually increasing it to about 45 minutes of walking for the same period. The anaerobic stretchers, on the other hand, met for one hour three times a week to stretch and tone their muscles.

At the end of the study period, significant differences emerged between the two groups. The walkers performed substantially better on several tasks that require executive control processes. For example, the aerobic group could switch between tasks more quickly than those in the anaerobic toning group. The members of the former group also reduced their reaction time on a "stopping test' and were less distractible. However, those who underwent toning and stretching had improved physical fitness, but they failed to increase their cardio-respiratory or mental fitness, claims Kramer.

In addition, aerobic walkers showed significant improvement in oxygen consumption as compared to anaerobic stretchers and toners. Earlier, the oxygen consumption scores were equal among members of the two groups. The additional oxygen inhaled during walking triggered faster reaction times and heightened the ability to ignore distractions. Kramer says that a "reasonable explanation' for these results is that improved oxygenation of tissue, leads to improved brain-blood flow through increased cardio-respiratory fitness, specifically to the frontal and prefrontal areas of the brain.

Results of this study also showed that it even benefits all those who have not been physically active in their younger days. Walkers improved their oxygen intake by five per cent, a modest but significant result. Kramer says: "Who knows whether you would get improvements across the board with higher levels of fitness or a lifetime of staying in shape? It is a possibility.'

This latest finding can have a significant impact among the elderly who are well-educated. Another new study shows that the educated elderly exhibit more severe brain shrinkage with age than people with less education. However, they may not show severe problems with their memory or thinking, according to C Edward Coffey of the Henry Ford Health System. This study says that while educated people have greater age-associated brain shrinkage, they also have greater protection from age-related mental impairment and possibly dementia.

The research pool for this study consisted of 320 healthy men and women between 66 and 90 years and living independently. Researchers used magnetic resonance imaging ( mri ) technology to measure brain size. The mri images revealed the following: brain shrinkage, which is demonstrated by an increase in cerebro-spinal fluid outside the brain, was significantly greater in people with higher education.