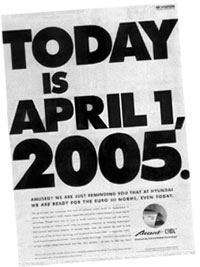 As per the auto fuel policy released this year, vehicles running in cities must meet Euro iii emission norms, apparently very stringent, by April 1, 2005. "Apparently', because vehicle manufacturers say their products are already up to the Euro iii mark.

So blared a full-page ad in The Hindu on October 20, 2003: "At Hyundai we are ready for the Euro iii norms, even today.' The ad is like a slap in the face of government policy. It clearly shows industry has leapfrogged to better technology, never mind the government's "good' intentions.

This became amply clear in a little spat vehicle manufacturers had with each other after the ad was published. Trumpeted Maruti Udyog Ltd officials, "we are already shipping Euro iii Altos to Europe. It is just a matter of minor adjustments and we will be able to meet the norms here also.' Ironically, the overseas market benefits from improved capability but not Indians, since the government policy doesn't push industry at all.

Carmakers also opposed the emphasis, in the ad, on how crdi technology allowed Hyundai to meet Euro iii norms. The Society of Indian Automobile manufacturers rose to defend Indian manufacturers, saying they were already exporting Euro iii compliant vehicles, both with crdi and non-crdi technologies. But the ad made its point: industry now sees the advantage of wooing consumers by highlighting vehicles' emission performance.

In the spat, everyone missed one ominous sign in the ad. It says: "we realized the need to give India state-of-the-art diesel technology and introduced the Accent crdi.' So now, even Hyundai is going the diesel way to stave off competition. It has announced plans for a diesel version of Santro, and Maruti already has made its diesel plans public. Surely this mad race to dieselise, when refineries are not willing to produce clean diesel, is dangerous?