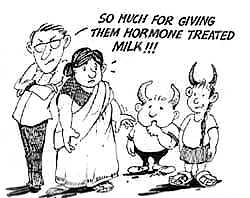 A PROPOSAL by the National Dairy Development Board to import bovine somatotropin (BST), a synthetic growth hormone for cattle, has run into objections from the Indian Council for Agricultural Research (ICAR), which insists it must first clear BST for safety before it can be used in field tests. The European Commission has banned the hormone's use pending the outcome of tests of its long-term effect on cattle.

BST is a synthetic form of the naturally occurring bovine growth hormone (BGH), which, injected into a lactating cow's udder, can increase its milk yield by upto 30 per cent, according to field tests conducted in Western countries.

The NDDB had planned to import 600,000 doses of BST, but ICAR officials insist initial import will be limited to experimental quantities. "We cannot allow a new chemical to be imported and used on a large scale, without first verifying its suitability to India," assistant animal husbandry commissioner Lal Krishna explained.

University of Chicago scientist Samuel Epstein contends BST has not been tested sufficiently to justify large-scale use. His stand was echoed at a recent forum on animal health in the USA by animal experts who reported cows treated with BST had a higher incidence of mastitis and injection syndrome.

However, BST use is permitted in many Third World countries, including Mexico, Egypt and Brazil, and Monsanto, based in Canada, is reportedly donating 100,000 doses of slow release (14-day) BGH to the Commonwealth of Independent States. Two years ago, the Rural Advancement Fund International, a Canadian NGO, reported instances of BGH being marketed in the Third World because its sale was opposed in the USA and Europe.
Passes into humans
In India, Bharatiya Agro-Industries Foundation (BAIF) president Manibhai Desai objects to any hormone being injected directly into the udder. He contends the hormone would then pass unchanged into the milk and then into humans. The milk could be boiled or pasteurised in a bid to eliminate side-effects, but this is not always done. In Denmark, for instance, many girls attained puberty at an early age because of hormonal imbalance resulting from drinking unboiled milk containing BST.

ICAR officials maintain if hormones are to be used at all, the usage should be indirect, such as implants in the cow's ear and which takes upto one week to act.

There is big money involved in the BST sweepstakes -- with the global market estimated at $1 billion. This explains why millions of dollars have already been sunk into developing and advertising BST. At issue now is whether ICAR can control indiscriminate import of what its scientists say is a largely untested drug. With reports from Nitya Jacob in Delhi and Shubhangi Mehrunkar in Pune.