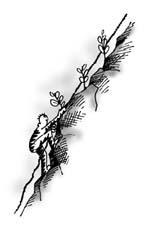 Volunteers with mountain-climbing experience have been employed to plant trees on the slopes of Mikurajima island, south of Tokyo. Landslides had devastated the greenery on these slopes when a typhoon struck the area five years ago.

The volunteers used ropes to keep their balance when planting trees on the 40-degree slopes, which have not been restored because of the lack of other means of access. So far a total of 3,565 saplings and 3,955 Cogon grass seedlings have been planted. Most of the saplings take root easily and include the boxtree. The afforestation drive will continue again in November when there are plans to plant several thousand more trees. If this project succeeds, the volunteers' expertise will be used to promote reforestation in other areas devastated by landslides.

In an earlier attempt to revive the greenery on the Mikurajima island, helicopters were used to spray grass seeds onto slopes created by landslides, but this method was found to be unreliable because most seeds were washed away by rain.

Mikurajima, under the jurisdiction of the Tokyo metropolitan government, has a population of about 260. The 1995 typhoon that hit the region triggered landslides in 18 locations on the island, famous as a place of outstanding natural beauty. It swept away cedars, mulberries, hemlocks, and cypresses over 24 hectares of land. Fallen trees covered an area of 220 hectares.

Till 1999, members of a volunteer group called Kyoju no Kai (Giant Tree Association), led by 71-year-old painter Tadao Hiraoka, planted 7,500 trees in two areas. However, they were unable to plant trees in 16 other areas, leaving them barren of trees. Hence, people living in these regions always live in the fear of similar landslides in the future, depending on the weather.

Hiraoka and his volunteers had tried last October to plant saplings, but the sharp slopes made the job impossible. He then called on young volunteers who had mountaineering experience to help.

The Japan Wildlife Research Center said it was unprecedented for volunteers to employ mountaineering techniques to plant trees and lauded the effort.