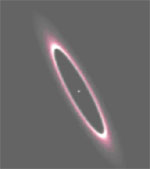 two new findings by astronomers have raised hopes of discovering life elsewhere in the Universe. The first is the discovery of water vapour around stars, planets and their satellites by the European Space Agency's Infrared Space Observatory, which orbits the Earth. The second is a snapshot taken by us National Aeronautics and Space Administration ( nasa ) scientists of a young star, hr 4796