Magnets on your mind? 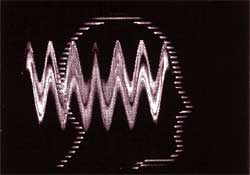 altering the brain's electrical signals with magnets may some day help people recover after severe injuries such as strokes and amputations. Researchers have recently proved that magnetic fields can change how our brain forms new neural connections.

The human brain's ability to rewire itself, called brain plasticity by the experts, is often beneficial. Blind people, for instance, can learn to process touch or sensory signals from their fingertips using regions in the brain usually devoted to vision in normal people. But new brain connections can also pose problems.

People who have had limbs amputated sometimes feel as though their "phantom limbs' are being touched when something is actually touching their faces. Others feel excruciating and untreatable pain in these phantom limbs.

Leonardo Cohen, Ulf Ziemann and Brian Corwell at the National Institute of Neurological Disorders and Stroke near Washington, usa , wondered if magnets could inhibit brain plasticity. By applying a changing magnetic field to the skull, a technique baptised transcranial magnetic stimulation (tms) by its developers, it is possible to induce electric currents on the brain's surface.

Since the mid-1980s, neurologists have used the tms as a diagnostic aid to see if motor nerve pathways are intact enough for muscles to twitch. And some researchers have suggested that magnetic fields might, in fact, help treat many psychiatric disorders.

Cohen's team simulated the loss of nerve activity that occurs after an amputation by inflating tourniquet around the elbows of several volunteers for about 20 minutes. With electrodes attached to the biceps to measure muscle twitches, the team held an electromagnet over the brain's motor regions. "It's a tiny current, but you activate a number of neurones," says Ziemann.

The team found that the "amputation" of the lower arm altered the brain's representation of the upper arm. And the muscles responded dramatically when the team put the magnet on the side of the brain that controlled the "amputated" arm.

But with the magnet over the other side of the brain, the biceps behaved almost as if the tourniquet was absent. This suggests that simulation of non-plastic regions of our brain could inhibit plasticity in other motor areas. These effects persisted for over an hour, the team claims.

"This is a completely new idea to demonstrate that we could modulate this short-term plasticity up or down," Ziemann says. It is possible that doctors could use this technique to enhance plasticity after a stroke, when the brain is reorganising itself to reroute neural connections around damaged areas.

However, they could also use magnetic fields to impair undesirable plasticity, such as the sort that causes phantom pain after amputation of limbs.

"If you could restrict or prevent that kind of plasticity, that would be great," says Jon Kaas of Vanderbilt University in Nashville, Tennessee, usa. Kaas has has studied plasticity changes extensively and is a noted expert in his field. Any drug or stimulus that influences the excitability of the brain can enhance plasticity, says Kaas, but targeted magnetic stimulation could have ceratin definite and clear advantages over conventional drugs that often affect the entire brain and usually cause various undesirable side effects.