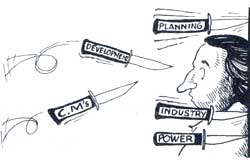 Interestingly, the Prime Minister, P V Narasimha Rao, did little to rescue his embattled environment minister. He simply referred all queries on environmental clearance to him. The main source of the grievance is apparently that in an atmosphere of liberalisation, the MEF is an isolated agency imposing ever more controls. Many chief ministers were annoyed that the MEF never came up with constructive suggestions. It had limited its role to pointing out what all could not be done.