Mozambique takes over its dam from Portugal 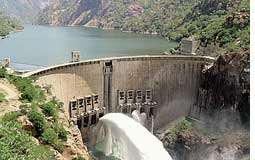 Mozambique formally took over the Cahora Bassa dam from its former ruler, Portugal, on November 27. Mozambique had to pay Portugal us $700 million for control of the dam, which is the second largest hydroelectric project in Africa.

The dam supplies power not only to Mozambique but exports power to Botswana, South Africa and Zimbabwe. Plans are underway to export power to Malawi. "The control of the dam signifies for us the elimination of the last vestiges of European colonialism in Africa,' said President Armando Guebuza during the handover ceremony. Heads of state from Zimbabwe, Botswana, Zambia and Malawi were also present at the event. "The negotiation process had been so long and complex that the country had to proclaim its independence in 1975 without the control of its strategic infrastructure,' Guebuza said. Control of the dam is expected to fetch Mozambique us $150 million annually and help industrialization.