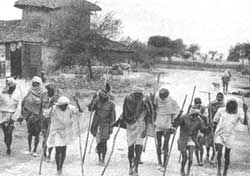 KIDNEY stones, a human nerve disorder and a fungal crop disease may all be relegated to history, thanks to the discovery by scientists at Jawaharlal Nehru University in Delhi of a gene that helps to break down oxalic acid, the main culprit.

Asis Datta, professor of molecular biology and biochemistry, and Anuradha Mehta of JNU's School of Life Sciences isolated the gene from the Collybia velutipes fungus. An enzyme called oxalate decarboxylase coded by the gene breaks down oxalic acid, a substance that induces kidney stones and neurolathyrism, a nerve disease caused by the consumption of kesari dal. Oxalic acid is also produced by the Whetzelinia sclerotiorium fungus on crops such as sunflower and rapeseed and destroy them.

Kesari dal contains the neurotoxin ODAP which can induce spasticity of the leg muscles, lower-limb paralysis, convulsions and even death. The toxin is synthesised in the plant in a two-step reaction with oxalic acid, which also accumulates in plant tissues of sunflower and rapeseed when the crops are attacked by the W sclerotiorium fungus. Its concentration increases when the pathogen colonises the host tissues, causing wilting and leaf death.

The enzyme encoded by the newly-discovered gene degrades the oxalic acid into carbon dioxide and formic acid. It can now be produced in the laboratory and Datta contends it can be used to develop an inexpensive kit to diagnose kidney stones. At present, kits used to detect oxalic acid concentration in the blood and urine are manufactured abroad and are expensive.

The gene can also be introduced into plants and kesari dal to reduce the concentration of oxalic acid.